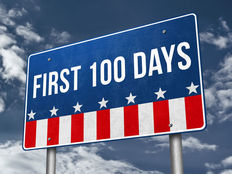 President Joe Biden’s first address to Congress conveyed, in no uncertain terms, that his first 100 days are a precursor for what’s next on his agenda: a significant, paradigm-shifting investment in America’s infrastructure and social safety net that builds on the USD 1.9 trillion relief package passed earlier this year.

The massive expenditures and the tax increases necessary to finance those plans could—if enacted—have important implications for both markets and the U.S. economy. In our view, the technology, health care, industrials, and utilities sectors appear the most likely to be impacted by potential legislative actions.

Biden’s “Build Back Better” platform to reshape the economy comprises two packages: the “American Jobs Plan” (AJP), which focuses on infrastructure spending and fostering innovation in critical industries, and the “American Families Plan” (AFP), which seeks to improve access to education while expanding and extending tax credits for lower-income households and those with children. The latter proposals aim to accelerate the return of workers with young dependents to the labor market and could provide a boost to consumer spending.

Investors are likely to focus on the evolution of the AJP, which proposes about USD 2.25 trillion to USD 2.5 trillion in spending. Highlights include a possible USD 621 billion in support for infrastructure and clean energy technologies, especially electric vehicles, modernizing and expanding the electric grid, and structural and environmental upgrades to buildings. This total also includes funding for the deployment of 5G wireless networks and broadband connectivity as well as investment in traditional infrastructure, such as roads and bridges. The latter expenditures would be augmented with a USD 500 billion highway bill due for reauthorization later this year.

The AJP would allocate about USD 880 billion for “critical technologies,” including semiconductor manufacturing, vaccine development, and other industries where domestic capabilities are deemed strategically important to U.S. competitiveness and security. Outlays would include substantial spending on innovation-focused federal procurement and research and development, with an emphasis on clean energy and greening American industry. The plan also expands and/or extends tax credits related to advanced technologies, manufacturing, and supply chain reshoring.

Many of these spending initiatives appear to have sufficient backing within the Democratic party, although Congress still needs to identify the funding mechanisms and details behind the execution of these policy priorities. Potential beneficiaries of these measures could include utilities, companies in the electric vehicle supply chain, sellers of semiconductor manufacturing equipment, and industrials names whose products promote efficiency and the clean energy transition.

Footing (Part of) the Bill

The expenditures in the AJP and the AFP would be funded, in part, by tax increases on corporations and individuals. However, we see the potential for the final package to involve more deficit spending than proposed by the Biden administration.

Tax proposals intended to finance the AJP include an increase to the statutory corporate tax rate to 28%—up from the 21% rate instituted by the Tax Cuts and Jobs Act of 2017, but still lower than the previous rate of 35%. With some Democratic senators advocating for a 25% corporate tax rate, a levy closer to Biden’s initial proposal would likely require a phase-in period to garner enough votes to pass.

Biden appears to have sufficient support to increase taxes on corporations’ international revenues, given the broad political appeal of taking a tough stance on offshore profits by U.S. businesses. Biden’s proposals would eliminate deductions that lower multinational corporations’ effective tax rates and increase the levy on global intangible low-taxed income (GILTI) to 21% from 10.5%. Although the negotiation process could moderate the GILTI rate somewhat, it is unlikely to fall significantly lower than the level proposed in Biden’s plan. The big U.S. technology companies and multinational pharmaceutical firms would likely bear the brunt of a tougher international tax regime.

The Biden administration has also advocated for some form of a minimum tax on book income1 to target large U.S. companies paying low effective tax rates. But if this proposal garners enough political will to pass, the introduction of tax deductions and concessions for specific industries—especially those championed in the AJP and AFP—could moderate its impact.

On the individual side, the AFP proposes taxing capital gains and dividends at the ordinary income rate (39.6%) for those earning more than USD 1 million. This rate may drift down to 28%, a level that many policymakers believe is optimal for generating revenue.

All these revenue-raising proposals remain in their early stages; given the potential implications for corporate earnings and investors, we will closely monitor how the negotiation process evolves.

Although the AFP does not include measures to reduce health care costs, the administration may wait until 2022, a midterm election year, to seek expanded access to health insurance through the Affordable Care Act and measures to lower prescription drug costs. Investors should also monitor the possibility of government action related to mega-cap U.S. technology platforms, particularly addressing privacy concerns and practices lawmakers have described as anticompetitive.

With Biden’s first 100 days in the rearview mirror, the potential changes to come over the next 12 to 18 months will have important ramifications for the markets, the economy, and specific industries.

1 Book income is the net income that corporations report in their financial statements to shareholders. This financial metric can differ meaningfully from taxable income, or the amount of income on which a company pays taxes.

This material is provided for general and educational purposes only and is and not intended to provide legal, tax or investment advice.

The views contained herein are those of the authors as of May 2021 and are subject to change without notice; these views may differ from those of other T. Rowe Price associates.

This information is not intended to reflect a current or past recommendation concerning investments, investment strategies, or account types, advice of any kind, or a solicitation of an offer to buy or sell any securities or investment services. The opinions and commentary provided do not take into account the investment objectives or financial situation of any particular investor or class of investor. Please consider your own circumstances before making an investment decision.

Information contained herein is based upon sources we consider to be reliable; we do not, however, guarantee its accuracy.

Past performance is not a reliable indicator of future performance. All investments are subject to market risk, including the possible loss of principal. All charts and tables are shown for illustrative purposes only.