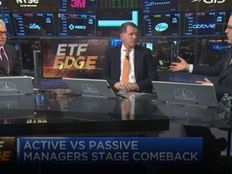 2022 was a big year for active management, and JEPI flourished, amassing $17 billion in AUM as investors found a lot to like in the fund. JEPI uses an active approach to focus on large-cap U.S. stocks with lower volatility, collecting premium through selling out of the money S&P calls. “It’s going to be much more of a higher-quality portfolio,” Reiner said. With holdings such as abbvie, Progressive, ExxonMobil, United Health Group, and Coca Cola, JEPI leans on blue-chip, low-volatility holdings.

Teasing out why active management was so successful in 2022, Nadig noted, “We saw huge dispersion among stocks.” With many stocks tumbling while others succeeded, active managers had pronounced opportunity to beat their benchmarks.

Nadig asked Reiner how they choose which stocks to hold onto, which ones to clip, and how they exercise options. Reiner said that the quality of the stock is important and sometimes they don’t even focus on dividends. “When the tide goes out and the market goes down, you want to own good names regardless of whether you do options or not.”

Looking at charts comparing performance to the S&P, it might appear that JEPI only modestly outperformed. But Pisani observed that the payouts made the overperformance quite significant. Reiner noted that JEPI’s strategy provides 7%–9% distributed income, with last year topping 11%. Though the price comparison remains modest, once you factor in the dividends, JEPI appears to have outperformed by over 14%.

“In general, investors should always be looking at total return,” Nadig said. “Where this distinction between income and capital growth comes in is when you are starting to think about taxes, or you are starting to think about using that income if you are in retirement, or you have a liability you need to match with an income stream. That’s where a strategy like this can really pay off. Pardon the pun!”

Reiner offered that even investors who prefer passive products have found utility in JEPI as a conservative equity in their portfolios. “We’re also seeing people use it as an an anchor tethered to an income model.” Income remains challenging to find, making JEPI all the more attractive for investors looking for revenue streams that don’t come with a ton of credit risk.

“Active is really about trust. Nobody is going to tell you what’s going to happen tomorrow, and if they do, they’re lying,” Nadig asserted, adding that there’s no way to know. He also pointed out that every day the math changes when you have an options overlay, making it important for investors to be able to have faith that the active manager is making the right call more frequently than not. “At the end of the day, people tend to come back to active managers when you are talking about a multi-asset class approach here.”

Mutual funds saw $1 trillion in outflows in 2022, even as ETFs added $600 billion to their AUM. “My bar bet is we are going to cross a trillion dollars,” Nadig proffered, saying that many investors didn’t go away, they instead moved into defensive positions. “We’ve even seeing more research into gold lately,” he added. Underinvested investors tend to come back into markets tentatively, so defensive funds like JEPI could continue to see success in 2023.

Reiner noted that many people are expecting compressed earnings and a recession. “Often, the market bottoms before unemployment peaks, before earnings trough. A lot of this, I think, is priced into the marketplace,” he said.

Nadig said, “The thing that scares me most about the market is how consistent the consensus is.” He says that everyone is anticipating a recession, which actually makes him bit more bullish on the market. Reiner concurred.

Pisani pivoted to yesterday’s big news, which saw TMX purchase a 21% minority stake in VettaFi. “You always look for those strategic synergies, and honestly,” Nadig said, continuing, “if you think about the Toronto Stock Exchange over the years: first ETFs, first bond ETFs, first options ETFs, first and only bitcoin ETF for a long time, semi-transparent active — a lot of that stuff comes from Canada first, and then we incorporate it here in the U.S. I’m really excited to be partnering with an organization that has that kind of innovation behind it.”