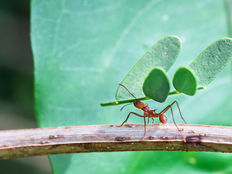 Turning to ANTs to Take Over Front-Runners

Often, this situation is blamed on the transparent nature of many fund structures but actively managed non-transparent ETFs (ANTs) can help issuers and managers vanquish front-running.

“Invesco is looking to active, nontransparent exchange-traded funds as the next step forward for the $4.6 trillion industry, hoping the new products will be less vulnerable to traders who exploit expected changes in ETF holdings,” reports Claire Ballentine for Bloomberg.

Under NAV-based trading, a process similar to how existing transactions in mutual fund shares take place, ANTs investors would be able to send in orders intra-day based on a proxy price that represents the NAV, which is calculated at 4 pm of each day. However, this will concentrate most of the day’s liquidity around the final end-of-day price.

“Active managers have until now been a bit skittish about having to show their hand on a daily basis,” according to Morningstar. “This structure would serve to alleviate concerns about daily portfolio disclosure.”

Invesco ANTs “would join a slate of products introduced this year that don’t disclose their portfolios each day, a departure from traditional ETFs that reveal holdings daily,” according to Bloomberg. “Advocates contend that the new structure will help ETFs win over assets from mutual funds, while others question how much investors will be interested in less transparency and the higher costs associated with the active products.”

ANTs issuers believe that semi-transparent active ETFs offers the best of both traditional active equity and ETF worlds, highlighting value add through the alpha potential of active management, access to a growing array of active equity strategies, the advantages of the more efficient ETF structure, and the additional choice of structures that meet investor needs.

“Invesco had already filed with the Securities and Exchange Commission for approval of the nontransparent Focused Discovery Growth ETF, which will invest in U.S. companies that the fund’s managers expect to have above-average growth rates,” reports Bloomberg.