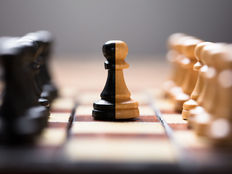 With stocks turbulent and bonds failing investors at the hands of rising interest rates, market participants may want to consider unique avenues for reducing volatility.

Merger arbitrage, which is often the territory of professional investors, is one way of doing that, and it’s accessible in fund form thanks to The Merger Fund, courtesy of Virtus Investment Partners. The actively managed MERIX focuses on shares of companies engaged in corporate reorganizations, including mergers and acquisitions.

“The highly specialized team seeks to profit from the timely completion of corporate transactions with minimal correlation to traditional stocks and bonds and positive correlation to interest rates, all while striving to minimize drawdowns in volatile markets,” according to Virtus.

Typically, the fund’s managers will buy shares in a target company in an all-cash acquisition. In takeovers financed by equity, MERIX can short the suitor’s shares. That form of deal-making and mixed cash/equity transactions often accounts for the bulk of the mutual fund’s roster.

Obviously, it takes experience to execute this strategy. Fortunately, the MERIX team has that. Managers Roy Behren and Michael Shannon have been running MERIX for 15 years, and they’ve been in the financial services industry for more than three decades.

“At its core, the process leans heavily on the experience of the investment team to quickly synthesize new deal information and identify opportunities based on a variety of deal-related factors like an estimate of the deals’ timeline, potential regulatory barriers, and possibility for shareholder disapproval,” according to Morningstar. “The firm’s proprietary quant risk system accompanies the team’s fundamental research by aggregating deal specific information for ongoing analysis and portfolio-level risk calculations. The tool has been sufficient for the team’s approach over time.”

As of the end of the second quarter, MERIX has 79 long positions and 10 short positions with an average position size of 1.14%, according to Virtus data. That’s an indication that the fund’s individual deal risk is low. The technology and industrial sectors combine for north of 53% of MERIX’s sector exposure.

Long-term data suggest that MERIX has the goods when it comes to solid returns across a variety of market environments and, perhaps equally as important, credibility when it comes to reducing correlations to traditional asset classes.

“The team’s expertise and ability to navigate this strategy through all environments shows in its track record. Since the fund launched in 1989, its A shares posted a 5.8% annualized return, with just four down years, and a below 0.15 beta to broader equity and fixed-income markets,” added Morningstar.