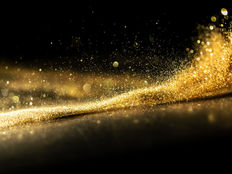 One way of describing the performances of gold ETFs in 2022 is “interesting.” Interesting because some investors are apt to be disappointed by the yellow metal’s showing this year while, on the other hand, bullion performed as expected.

Indeed, ETFs such as the SPDR Gold Shares (GLD A-) and the SPDR Gold MiniShares (GLDM ), didn’t generate upside in 2022. That’s the result of rising interest rates and the strong dollar, the former of which makes commodities less appealing because there are no dividends or interest payments.

Regarding the dollar’s status as one of 2022’s best-performing currencies, that’s a drag on gold because commodities are priced in dollars. Still, GLD and GLDM deserve some credit because the two bullion-backed ETFs outperformed broader equity and fixed income benchmarks this year. Other factors indicate gold could shine next year.

“With the likelihood of a US recession growing, gold may benefit from investors trying to pivot towards counter-cyclical and defensive portfolio positioning. Gold’s behavior during previous recessionary periods in the US is clearly in favor of the yellow metal. Gold’s performance during other cyclical phases shows that on average, gold also fares well outside of recessions,” according to State Street Global Advisors.

Another point in favor of gold heading into 2023 is the expectation that inflation will continue easing, potentially prompting the Federal Reserve to scale back the pace of interest rate increases. In turn, that could lead to retrenchment by the U.S. dollar.

“Given the historical negative correlation between gold and the US dollar, gold came under pressure in the strong dollar environment that emerged this year. But expectations for a monetary policy pivot or pause in 2023, along with mean reversion in other global economies, may put pressure on the US dollar. This may lead to renewed interest in gold among US investors seeking to hedge against a more temperate US dollar environment,” added SSGA.

“Strong investment demand in Europe and global central bank buying in 2022 are key trends that may persist into next year. Central bank net buying in particular was a source of significant demand, with an estimated quarterly record of 400 tons of gold added to central bank holdings in Q3. This brought the year-to-date 2022 central bank gold demand on par with record levels for full-year demand in 2018 and 2019,” concluded SSGA.