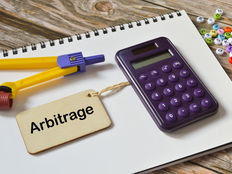 Commodities continued to rise last month as investors look for ways to hedge against inflation and rising rates, however, investors may be missing out on an especially well-positioned strategy: merger arbitrage.

Merger arbitrage is an alternative investment strategy offering investors the potential to create a more efficient and diversified portfolio, targeting both steady gains and minimization of drawdowns through up and down markets alike, according to Virtus.

Unlike traditional investments, the performance of event-driven investments, such as the Merger Fund MERFX, is largely dependent on a number of identifiable variables, as opposed to market conditions.

Commodities, on the other hand, rose another 9.63% in March after an 8.8% rise in February, driven by geopolitical conflict and inflation as the two main reasons for the broad-based uptick in commodities prices, according to Jim Wiederhold, associate director, commodities and real assets, S&P Dow Jones Indices.

MERFX invests in companies involved in pending mergers, takeovers, and other corporate reorganizations, with the goal of profiting from the timely completion of these transactions. Its returns historically have had a low correlation with the stock market and near-zero correlation with bond and commodities markets, as each investment tends to trade on idiosyncratic deal dynamics.

Regardless of whether the market goes up or down during the pendency of the transaction, the value of the consideration to be received is a fixed dollar amount that the arbitrageur stands to make as a potential return, or spread, upon the successful closing of the deal, according to Virtus.

In general, merger arbitrage managers seek to make their investment strategies as market-neutral as possible, leaving the bulk of the portfolio’s exposure to whether specific corporate events occur. As a result, merger arbitrage strategies have been able to generate positive returns in most market environments, providing significantly less downside in bear markets, according to Virtus.