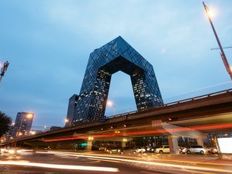 China Watcher: Do Not Expect a Policy Turn From Beijing

Investors have cheered a recent string of dovish domestic and foreign policy announcements from China in the past several weeks, with the KraneShares CSI China Internet ETF (KWEB B) up 35% and iShares MSCI China ETF (MCHI A) up 24% through November. But Scott Moskowitz, lead geopolitical risk analyst for Morning Consult, is warning that a full turn in policy from the world’s second-largest economy isn’t in the cards yet.

VettaFi contributor Dan Mika spoke with Moskowitz to break down what investors can glean from the geopolitical situation surrounding China. This interview has been edited for clarity and brevity.

Dan Mika, VettaFi: The latest report from Morning Consult showed increased tensions between China and the U.S. from its residents. But that happened before we saw quite a few things happen that I think gave investors reason to believe that China is starting to become more relaxed on multiple fronts.

Let’s start domestically. Last week, the government said it would reduce the quarantine time for travelers coming into the country. But we’re also seeing anger spawn on the streets about extended COVID-related lockdowns. Peking University just locked down over one case. What’s your view of the current situation around where the zero-COVID policy stands? How much investors should look into that as a broader barometer of what the Chinese government is thinking?

Scott Moskowitz, Morning Consult: (China-related securities) kind of fell and were pretty negative after the Communist Party Congress because a lot of what came out of that was that very little was likely to change in the short term. I think that was unsurprising. It would have been an odd time for Xi Jinping to walk back his policies; he needed to project strengths. He couldn’t throw into question this policy that he’s really staked his name on in the last couple of years. There were some changes to quarantine times, especially for inbound travelers. But I think the reality on the street is kind of different, and I think those things appear in different ways. I think the travel restrictions might appeal to global elites, especially Chinese elites who are struggling to get him out of the country. For executives from multinationals, maybe it seems like it’s not as impossible to get in and out of China. Whether that really convinces them to come back, the two days shorter quarantine, it’s hard to say. But it doesn’t seem like much has changed on the street. You see a lot of anger about individual lockdowns, and those sorts of things don’t seem to be letting up. It signals a specific intention, which can always have a positive bearing. But I’m not sure people are seeing a real change yet in their day-to-day lives. I think there’s been so much uncertainty about all the lockdowns. Every time it seems to be getting better, all of a sudden, it gets worse. I think people are hesitant to really believe that everything is turning the corner. Of course, we have seen a significant response in the market.

VettaFi: On Sunday, Bloomberg reported that China issued sweeping directives to prop up the property sector and support builders caught in that crunch. How much do you think that plays into the recent market moves, considering just how big of a contagion fear Evergrande was last fall?

Moskowitz: I think it’s absolutely massive. The property sector in every country is very important. But especially in China, it has a really outsized importance. People put so much of their capital into property; it’s the one market that they trust. Equity markets and capital markets still aren’t quite as stable and developed in places like China. Property has been the one consistent investment that has led to a really outsized over-investment in property, not just by companies but by regular people. When the property market takes a hit, there’s just massive contagion from that in terms of consumer confidence. Anytime that something is being done to address the property crisis is always going to be positive. But, like with everything, we’ll have to see if it’s too little too late and how much they can really turn it around because there’s so much sunk into it.

VettaFi: On Sunday, we got the readout of a three-hour-long conversation between Biden and Jinping at the G20 Summit. They agreed to restore communication on various issues, from climate change to food security. What does this bode for the future of China’s policies, acting in a way that makes investors feel like it’s a less risky place to put assets into?

Moskowitz: I think that seemed to be the thing that really moved markets the most. In my last report, we saw tensions have just been spiraling over the second half of the year, especially since August, since (House Speaker Nancy Pelosi) visited Taiwan. That has certain political considerations that happened in the run-up to the Communist Party Congress, where Xi was looking for this third term in office. It was a time when he couldn’t afford not to project strength. I think, in many ways, the Chinese people were looking for that. They do want their government to sort of protect their interest and project strength.

But the rising tensions and the militarization of it, as much as people want it, has really spooked people. What we see in the data on our end is that people will start to think, “Wow, this is a new normal.” When we ask people if they’re worried that tensions were going to continue to escalate in terms of economic tensions, but especially military tensions, we saw that really go through the roof in the last couple of months. Things really seemed to start to sour and then get even worse after the Communist Party Congress. Xi really put forward this hardline attitude of nothing’s going to change. I think what spooked markets is now even the last moderating influence in the party was sidelined when he appointed a slate of loyalists. That seemed to give them carte blanche to pursue an even more aggressive and assertive foreign policy. It really felt like nothing was going to change, and things were going to get worse. But one thing we saw is that people on both sides – I’m not sure they know how to compromise issues – but they do want compromise. They want tensions to be brought back. I think Xi recognized that now that he is sort of safe and comfortable… and locked into the next five years, I think there was a sense of a need to put a floor under relations to people who were really spooked. I believe this helps walk things back. There had been a cutoff in high-level dialogue across several issues, and this conversation, at least, put forward the idea that this isn’t what China wants. They don’t want to break up all communication with us; they want to show strength. But they want to maintain dialogue, and they want to work on things going forward.

Biden was very explicit in the readout when he said he doesn’t think China has plans to invade Taiwan anytime in the near future. That is something that has been specifically worrying China-related markets over the last few months. Since Pelosi visited, all of these companies had started to, for the first time, really seriously think about a time when they might have to exit the China market (if there was) an invasion and they might be forced by geopolitics. They were already looking a bit further afield because of supply chain issues related to COVID. Now, consider if we really need to diversify away from China. There were a lot of questions about the timeline, how urgent this diversification required to be, and how much planning they needed to do. There was a sense that maybe nothing tangible changed with the talk with Biden, but it really seemed to push back timelines. We’re not heading to the crisis just yet, so there’s time to figure this all out. As I said, we’re trying to put a floor under relations, which really calmed a lot of jangled nerves.

VettaFi: With all this in mind, what do you think the odds are that a U-turn from China on this policy easing, both on the domestic side and with the U.S.? I would say all the way since last September, Chinese-focused ETFs have lived and died by policy moves from Beijing. How much should we be reading into the future right now based on these most recent events?

Moskowitz: I don’t think the talks really intimated any tangible changes, and the things that have been hurting a lot of these ETFs, especially tech stocks, have been more about domestic policy. I don’t think Xi said anything, either at the Party Congress or in his meeting with Biden, that would really intimate a major change on the domestic side in terms of his hard line against some of these larger sectors he’s been trying to control. But one thing about the talks, I think more, is that when relations are bad, you see more of an increase in aggressive moves on either side related to trade, especially technology. We had the recent (U.S.) legislation about semiconductors and other things that was really hard on the tech market, obviously. I think we’re things settling out bilaterally. There’s some hope and how that would affect certain markets, but I don’t see this as a U-turn. I see it more as calming nerves and an attempt to say, we’re going to try to lower the temperature here.

They talked a lot about the need for compromise in need for dialogue. But they didn’t say we’re going to compromise in this way, we’re going to change our policy about this, this is going to be totally different, I didn’t really see anything to indicate that I think it really is just more about signaling, conscious effort to lower the temperature and that can be really beneficial. But in terms of actual tangible policy changes, I’m not sure we’ve seen that yet, or any true indications. Maybe (zero-COVID policies) will slowly, very slowly be walked back, and that could have beneficial logistic effects in terms of manufacturing and production and, hopefully, eventually, consumer confidence. But in terms of all of these policies towards their sectors and to ring-fencing investment in certain sectors, I haven’t seen, I haven’t seen any kind of about-face there.