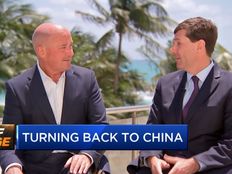 Tom Lydon, CEO of ETF Trends, and Brendan Ahern, CIO of KraneShares, discuss if exposure to China is feasible in current environments for foreign investors on this week’s “ETF Edge,” hosted live on CNBC by Bob Pisani from ETF Exchange in Miami Beach, Florida.

Tom Lydon, CEO of ETF Trends, and Brendan Ahern, CIO of KraneShares, discuss if exposure to China is feasible in current environments for foreign investors on this week’s “ETF Edge,” hosted live on CNBC by Bob Pisani from ETF Exchange in Miami Beach, Florida.

Ahern opens by discussing the interest of the China Securities Regulatory Commission (CSRC) in finding a solution for Chinese companies listing on U.S. exchanges with the SEC. The CSRC has issued two separate statements a week apart that indicate its interest in working with the SEC and the PCOB to allow audit reviews of Chinese companies.

“That, in theory, would resolve the Holding Foreign Companies Accountable Act, which could see the companies delisted in 2024,” Ahern explains. “We don’t have a definitive deal, Bob, but we certainly have the verbiage, the language, that it could be in the works.”

Fears of delisting have caused significant concern for investors, and Ahern believes that this has brought downward pressure to investing in China over the last year. Pisani expands on that, viewing diversion away from investments in China as being largely due to a political stance, and gives the example of value investors who are currently buying into Chinese securities at deep discounts.

“First of all, this situation didn’t happen overnight,” Lydon says, discussing the delisting risk of Chinese companies listed in the U.S. “This has been signaled for a while; however, the market reacted as though it was brand new news.”

For its part, KraneShares has been transitioning all available holdings from U.S. ADRS over into Hong Kong shares if a resolution isn’t found and the Chinese companies do end up delisted. Ahern explains that the KraneShares CSI China Internet ETF (KWEB B), a fund comprised of what KraneShares views as the growth drivers within China’s economy, was composed of 25% Hong Kong shares and 75% ADRs a year ago. In contrast, today, it’s primarily Hong Kong shares.

“These stocks have dropped dramatically in price, their valuations have been so much better, and they are, in fact, the same company,” Lydon says. “The Chinese economy is the strongest it’s ever been.”

Alibaba has increased buybacks by $10 billion, and Tencent has been buying shares at a rate of $1 million per day, reflecting the inherent value the companies see in themselves, a value that KraneShares agrees with.

“We can’t discount China,” Lydon explains, discussing the role that China will play for global markets over the lifetime of investors. “How many times do you get an opportunity to buy such good companies at discounted prices?”

KWEB has seen an influx of new investors in the last year as advisors and investors look for a way to access Hong Kong share classes through the fund. To date, KWEB has over $6.2 billion in AUM.