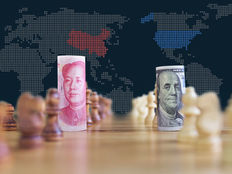 As Biden’s administration begins to repeal parts of the Trump-era bans on investing in China, investors may be left wondering what next.

The Biden Administration’s Politics Toward China

Former Ambassador Baucus explained that tension between perceived public pressure and opinion of the Biden administration and also from political parties have driven an aggressive view toward China, one that is being reflected in policies. Trump was what Baucus referred to a “transactional president,” and his policies reflected a very isolationist approach.

While Baucus doesn’t see Biden rolling back many of the sanctions or tariffs, he believes that Biden’s human rights values will be the guiding force globally going forward.

Baucus also expressed concerns about the lack of U.S. involvement in the Pacific-oriented trade agreement (RCEP) that China recently entered into, as well as potential membership in the Trans-Pacific Partnership (TPP).

Baucus views the U.S.’s departure from TPP as a large mistake, because by leaving, American interests are no longer advocated for in the area of the world in which China already dominates. The TPP accounts for roughly 40% of the world economy according to Baucus, while RCEP accounts for nearly 30%.

Not being a member of either agreement means that the U.S. will have to step up its presence in the region with trade agreements and, potentially, a regional trade agreement with China.

“I think China has been very clever, very strategic in many ways when President Xi Jinping announced back then One Belt One Road, now the BRI (Belt and Road initiative). I thought it was very insightful, very strategic, a very smart thing to do. Clearly China has taken advantage of the BRI and aggressively pushed the BRI for a couple reasons; one, to strengthen its own economy, but second, gain strategic interests in other parts of the world, and help provide resources for China.”

Baucus discussed the pivot toward Asia approach that occurred under the Obama administration, and the incorrect belief that engaging with China more would make China more like the U.S. At the time, the U.S. banded together with European countries as well as other Pacific nations to push back on some of China’s policies.

Standing Up to China

Former Ambassador Baucus doesn’t see a return to the policy of giving allies more space to deal with China on their own, instead pointing to the Biden administration’s pressuring of Australia and other allies to “stand up to China.”

He continues to say that “the Biden administration is trying to get more cohesion and more cooperation among allies with respect to China.”

The growing focus on tech and China tech companies, some of the largest in the world, is one that investors are increasingly interested in. However, it is something that Baucus doesn’t see as being a big focus for now for the administration, as so far the concerns have been primarily on growing the domestic economy.

He believes it will be another year or two before the Biden administration really starts to tackle the sanctions and tariffs on other countries, particularly China, but that these sanctions will be approached on a less political basis.

China as a Green Energy Leader?

When discussing the potential for China to be a leader in the green energy movement and the Paris Accords, Baucus said: “Bottom line is I think China will try, I think China will try to lead for a lot of reasons. One is because climate change is here, we’ve got to deal with carbon emissions worldwide. China, by volume, is the world’s largest emitter over the United Sates and per capita basis is the world’s largest emitter. China is going to try and lead.”

China, he went on to explain, saw a great opportunity to be a key player on the global stage with renewable energies, as well as a chance to push back on the domestic naysayers.

Moving on to discuss the role of outside investment in China in joint ventures, Baucus said that the investments are going to continue, albeit slowly.

“A lot of American companies, say Goldman (Sachs), have a lot of expertise and can help, if you will, raise the bar in some respects of some Chinese national services companies and it also means more investment, more U.S. investment in China. China wants more investment,” he said,.

When asked about his opinion on the strength of the U.S. dollar long-term as compared to the renminbi, Baucus said that he doesn’t see the dollar threatened in any short-term scenario by the renminbi. He noted that the bigger challenge to the strength of the U.S. dollar is in cryptocurrencies being created by different country’s national banks. “If central banks can issue their own (cryptocurrencies), that could potentially displace payment systems like Alibaba and Tencent and WeChat, and then the banks have much more control. That, I think, is the greater potential disruptor.”

Lastly, Baucus was asked about the growth of capital markets. He said that China was moving forward in a manner that was beneficial and constructive.

“China has moved away from approval by the government to a disclosure based system and I think that’s very, very helpful because that’s going to really open up capital markets. Western investors are going to see that and like that.” Chinese regulators are looking for ways to open up and modernize, but within certain limits, and carefully in a way that maintains China’s interests.