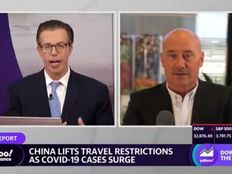 “The zero-COVID policy did not help their economy, didn’t help the markets at all over there,” Lydon posited, noting that the KraneShares CSI China Internet ETF (KWEB B) was down 80% over just a couple of months. Since bottoming out, however, KWEB has soared up 70%. Lydon continued, “You talk about generational opportunities, when you look at companies that have spent a lot time in China, you’ve got a lot of stocks with P/E ratios in the single digits — something we haven’t seen in decades.”

Lydon sees a rebound as being likely, with the saber-rattling about China being largely overblown. “Xi isn’t going to disconnect from capital markets,” he said.

The recovery in China could take some time to materialize, and that recovery is potentially threatened by surging COVID numbers. Lydon cautioned that just because the country has reopened, it doesn’t mean that lower lows are impossible. “The China economy is in tough shape; however, the big word for 2023 is diversification,” Lydon countered. “We in the U.S. tend to have a home country bias.”

Though having more allocated to U.S. companies has worked well since the financial crisis, Lydon expressed that it’s worth diversifying into other areas. “We know historically when it doesn’t feel good in your stomach, usually it means there are opportunities ahead.”

The big thing dragging down emerging markets in 2022 was the robust dollar, which maintained a surprising amount of strength throughout the year. “We may see a reversal in the dollar when markets finally settle,” Lydon noted.

ETFs continue to become the wrapper of choice, having seen their second-biggest year of flows in 2022. Lydon sees this as likely to continue. “You’re seeing more money continuing to shift over to ETFs that tend not to, at all, have capital gains distributions.” If more ETF proliferation breaks into 401K plans, that could be “doomsday” for the mutual fund, Lydon observed.