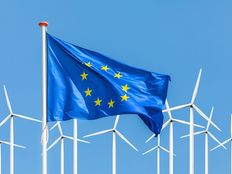 A Guide to the EU Carbon Market With KraneShares

Europe’s energy crisis has largely abated for now and a decision should be finalized within the next month on the RePowerEU initiative to wean Europe from reliance on Russian fossil fuels. Luke Oliver, managing director, head of climate investments, and head of strategy at KraneShares, gave mid-month guidance in a recent paper on what all of the changes mean for the EU’s carbon allowances market as well as looking at EU allowances performance recently.

The winter stockpiles for the EU are currently at about 95% capacity as of mid-November after Europe implemented policies this year that led to a reduction in seasonal demand, diversification of energy supply sources, and created minimum storage inventory obligations standards. Gas prices that were at historic prices over the summer have subsequently fallen as the crisis has eased, down almost two-thirds of their summer highs.

Russia’s invasion of Ukraine at the beginning of the year and its ongoing war continue to have long-reaching impacts on the macro environment, with inflationary pressures impacting stocks and sparking recession fears and reduced industrial output. Carbon allowances are fairly uncorrelated but have been subject to macro trends this year of global market volatility and uncertainty.

“However, equity indices are currently holding up better than expected, while Gross Domestic Product (GDP) remains largely positive. This sentiment was reflected in European equity markets, with EuroStoxx50 rallying ~16% over the last six weeks,” Oliver explained. “Policy reform and market tightening measures also present strong structural support for the future of the [EUA] program and its ability to weather a mixed macro environment.”

EU carbon allowances (EUAs) have moved around the support/resistance band of €80 ($83) for much of the year, either bumping up against it and retreating to the mid-€70s recently or hovering above between €80-90 ($83-93) from April through September this year.

“This price action pattern may continue until new positions get reestablished at higher levels as the market absorbs some recent positive signals and establishes a clear view of the key regulatory matters currently being discussed,” Oliver wrote.

The RePowerEU plan put forth by the European Commission earlier this year works to build the framework for eliminating the reliance on Russian fossil fuels. At the height of the energy crisis in Europe, proposals included selling EUAs from the market stability reserve (MSR) to help fund the transition, a move that could undermine the validity of the MSR and reduce EUA prices. The MSR was created as a means to prevent price volatility in the allowances market with its ability to release or hold allowances.

“In this month’s plenary session, the Parliament is set to finalize its position, which will most likely be to frontload EUAs from future auctions, a materially more constructive solution than tapping into the MSR. Meanwhile, the EU Council has proposed a hybrid approach of 25% sourced from frontloading and 75% from the Innovation Fund,” Oliver explained.

The frontloaded EUAs would be brought forward from auctions scheduled between 2027-2030, increasing financing capabilities in the short term without bloating the system unnecessarily in the long term. Depending on which resolution is voted in, EUA prices could diverge up to 23% according to Bloomberg New Energy Finance.

“With carbon analysts at the recent Carbon Forward conference in London issuing an €80 ($83) median forecasted price for EUAs by the end of 2022 and clarity returning to the supply and demand dynamics, we are watching closely for the break out above this level,” said Oliver.

The fund’s benchmark is the IHS Markit Carbon EUA Index, an index that tracks the most-traded EUA futures contracts, a market that is the oldest and most liquid for carbon allowances. The market currently offers coverage for roughly 40% of all emissions from the EU, including 27 member states and Norway, Iceland, and Liechtenstein.