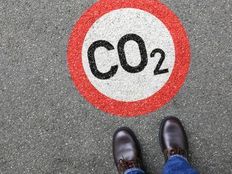 A Technical Analysis of the EU Carbon Allowances Market

Carbon allowances prices in Europe have been on an upward trend in December, rising more than 20% in the last two weeks, buoyed by the upcoming end of year auction, expiration of options and futures contracts, and the arrival of colder weather in Europe.

Carbon allowances trade like most commodities, in the futures market, where buyers set price expectations at specified dates. The current benchmark December 2022 European Union Allowances (EUAs) futures contracts are set to expire on December 19 and the great majority of these positions will likely be rolled into December 2023 contracts which are already €3.60 ($3.79 USD) higher than the 2022 contracts, explained Luke Oliver, managing director, head of climate investments, and head of strategy at KraneShares, on the Climate Market Now blog.

The current open interest in the December 2022 contracts, estimated around 340 million tons of carbon allowances, will largely be rolled forward so that traders can maintain their exposures: the bulk is expected to go to December 2023 contracts but some will also be rolled into futures contracts that expire March 2023, right before the end of the current compliance cycle in April. The futures contracts that don’t roll forward will be delivered into physical EUAs.

“The daily EU Allowance (EUA) auctions end on December 19, completing the sale of more than 482 million EUAs to the market,” explained Oliver. “Compliance and speculative traders will have to wait until January 9 before supply resumes with the start of the 2023 schedule. The lack of new supply for three weeks is expected to be strongly supportive for the market.”

Options on the December 2022 EUA futures are set to expire Wednesday, December 14, and ICE data currently has the majority of call option strike prices above the market prices. The positions of call options often have an influential roll on the underlying EUA prices and are likely to draw futures prices higher leading up to December 19.

Europe is also finally experiencing colder weather after an unseasonably warm November and as natural gas and coal prices, as well as demand, increase and storage levels wane, demand for EUAs to offset will grow. Natural gas prices are still “far out of the money for power generation,” wrote Oliver, meaning that Europe will need to continue to rely heavily on coal in the short-term, a carbon emission-heavy fuel source that creates strong demand for allowances.

Uncertainty regarding how the EU Emissions Trading System, the cap-and-trade market for allowances, will fund the energy transition away from Russia and towards renewables should also be decided by the end of the year. A source of volatility for the EUA market in much of 2022, fears that the EU ETS would sell allowances from its reserves for emergency funding, and thereby devalue EUAs, sent prices falling earlier in the year.

EUA prices have largely recovered since then on talks of bringing allowances forward early from future auctions without pulling from the Market Stability Reserves, and the outgoing EU Czech president has committed to finalizing any decisions on the EU ETS reform as well as RePowerEU by January 1, when it passes leadership on to Sweden.

Oliver soundly believes that the technical outlook for EUA prices is a bullish one: EUAs are currently above their 20-day, 50-day, 100-day, and 200-day moving average, strong buy indicators for trend followers.

“After prices climbed above a key Fibonacci level at €85.80 last week, there remains a succession of short-term technical price targets between €88.75 and €94.19 before a rally would open up the existing record high of €99.22,” Oliver wrote.

The fund’s benchmark is the IHS Markit Carbon EUA Index, an index that tracks the most-traded EUA futures contracts, a market that is the oldest and most liquid for carbon allowances. The market currently offers coverage for roughly 40% of all emissions from the EU, including 27 member states and Norway, Iceland, and Liechtenstein.