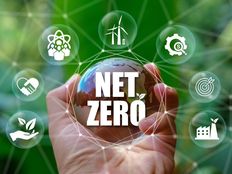 Emissions and climate initiatives are an increasing focus for shareholders and company boards as public, legislative, and investor pressure grows to reduce greenhouse gas emissions while increasing transparency around practices and data. Companies with net-zero commitments are doubling between this year and next, growing from 102 to 238 according to a new report from Just Capital. The biggest emitters continue to have some of the lowest commitments.

Companies committing to broadly reducing emissions grew from 412 to 489 headed into 2023, reflecting increased attention as climate risks become a more regular part of the narrative, but the list of those that have specific targets is much smaller.

According to the report, companies that have verified targets that align with a two-degree cap on warming through the Science Based Targets Initiative (SBTi) nearly doubled from 25 to 45 but remain a small percentage. 83 companies with the most aggressive targets, an SBTi target of just 1.5 degrees of warming, will be verified for 2023, a 21% growth over this year’s number.

“The findings show considerable progress,” Martin Whittaker, CEO of Just Capital, told CNBC. “But as we know there’s hesitancy accepting these commitments at face value. We’ve seen a doubling in net zero commitments, and an increase in science-based targets as well, but these are not necessarily concentrated in industries that are high polluters, which of course is where the action needs to be focused.”

The utilities sector had the highest number of commitments to net zero and the highest percentage at 61% of companies setting goals, but those goals remain the vaguest and least ambitious of any of the sectors reported. Utilities had the greatest number of disclosures and disclosed more data than other industries, but as one of the most carbon intense sectors, companies have yet to set ambitious targets.

It’s also important to note that SBTi is currently not accepting commitments or validating data from fossil fuel sectors such as oil and gas while it works to hone and finalize its methodology for measuring emissions and reduction targets, given the complex nature of these particular sectors.

Investing in the Companies Actively Transitioning

The KraneShares Global Carbon Transformation ETF (KGHG ) seeks to capture the true potential within the carbon transition by focusing on companies from within industries that are traditionally some of the highest emission offenders but that are on the precipice of transitioning to renewable technologies.

KraneShares believes that the upside potential of investing in these companies as they transition is enormous. These companies that are set to disrupt their industries would benefit greatly from being leaders in the transition, as the cost of carbon emissions will only become more expensive, cutting into the bottom line as demand decreases for high emissions offenders.