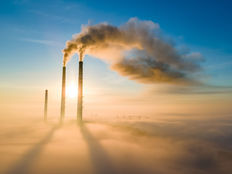 The European Union bloc and EU Parliament announced they had reached an agreement over the weekend to reduce emissions more aggressively in the coming years. In doing so, changes to the EU Emissions Trading System, Europe’s cap-and-trade carbon allowances system, will be made to bring the carbon market in alignment with the faster trajectory towards net-zero, reported France 24, an international news channel.

Cap-and-trade carbon markets are regulatory systems that set limits on participants and sectors for the amount of emissions permitted, and any overages force the company to buy additional allowances to cover. These systems are designed to tighten supply over time, making it increasingly costlier to pollute and driving industries to reduce emissions.

The agreement speeds up the rate of emissions cuts for countries and sectors within the ETS with a goal of 62% reductions by 2030 (based on 2005 levels), up from previous goals of 43%. It also has set a deadline for phasing out free allowances currently in the system, aiming to cut free allowances by 48.5% by 2030 and entirely by 2034.

“Emissions in the ETS sectors must be cut by 62% by 2030, compared to 2005, which is one percentage point more than proposed by the Commission. In order to reach this reduction, there will be a one-off reduction to the EU-wide quantity of allowances of 90 Mt Co2 equivalents in 2024 and 27 Mt in 2026 in combination with an annual reduction of allowances by 4.3% from 2024-27 and 4.4% from 2028-30,” the European Parliament said in the press release.

The cap-and-trade carbon market will also likely be broadened to include the maritime sector, waste incineration sites, and flights within Europe, pending a positive report from the EU commission.

Households will pick up the bill for emissions tied to gas and fossil fuel heating starting in 2027, but the amount will be capped until 2030 via the creation of a secondary carbon market that will focus on transportation fuels used in driving and heating in buildings, as well as fuel used in manufacturing. This is entirely dependent on how the energy crisis plays out in the next year, however, and will be delayed if energy prices continue to soar.

The changes will be supported by Europe’s new “carbon border tax” (see also: Europe Raises the Table Stakes on Global Emissions) that will offset the reduction and eventual elimination of free allowances, with the carbon tax phased in at the same speed that the free allowances are phased out. The carbon border tax will keep Europe competitive with outside countries that currently don’t have carbon pricing built into their production.

“This deal will provide a huge contribution towards fighting climate change at low costs. It will give breathing space for citizens and industry in difficult times and provide a clear signal to European industry that it pays off to invest in green technologies,” Peter Liese, EPP, DE, Member of European Parliament (MEP) and the EU ETS rapporteur, said after the announcement.

The fund’s benchmark is the IHS Markit Carbon EUA Index, an index that tracks the most-traded EUA futures contracts, a market that is the oldest and most liquid for carbon allowances. The market currently offers coverage for roughly 40% of all emissions from the EU, including 27 member states and Norway, Iceland, and Liechtenstein. KEUA has an expense ratio of 0.78%.