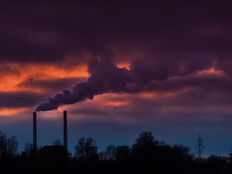 “The Biggest Short Squeeze in History”: the Mispricing of Carbon

One of the largest crises to happen in any of our lifetimes is already all around us and it’s likely going to come at a cost larger than the Great Financial Crisis of 2008, according to Luke Oliver, managing director, head of climate investments, and head of strategy at KraneShares, in a recent paper. The cost of mispricing carbon emissions since the Industrial Revolution is now causing one of the biggest global reallocations of capital ever, and is going to cost more than one hundred trillion dollars.

Latest scientific estimates put the social cost of carbon (the monetized economic and social cost to a society from releasing one ton of carbon dioxide) at about $125.

“This means that in just the past 20 years, we have added $96 trillion of damage to the global economy, which is roughly equal to the total annual world GDP in 2021. This number is exponentially growing, with over $5 trillion added last year,” explained Oliver. For reference, the total cost to the net worth of U.S. households from the subprime mortgage collapse in 2008 is estimated to have been about $13 trillion.

The course correction of our current emissions trajectory is estimated to cost about $130 trillion in investments, according to the International Renewable Energy Agency, to curb global warming and its associated risks.

The climate debate continues to rage hotly as a divisive topic alongside the merits or traps of ESG investing, depending on your perspective. The reality of the carbon transition that is currently happening is one that supersedes any and all opinions, however.

“While we believe the evidence for human-activity-driven climate change and its associated risks is real, it does not actually matter whether you, as an investor, believe the science or not,” Oliver wrote.

“Global governments and institutions are taking this seriously, and they are allocating huge amounts of capital, regulations, and incentives to change how the global economy functions. We believe it is prudent, if not imperative, to position your portfolios for this changing investment landscape.”

Pricing in the Carbon Problem

The current problem that we now find ourselves in, as a society heavily reliant on heavy emissions-producing industries, is that carbon dioxide and greenhouse gases were a relatively unknown quantity for a long time and their risks for warming the planet were only understood in the last 80 years. Because they were never incentivized economically, capital has been “misallocated” since the Industrial Revolution to processes that increased production and greenhouse gases instead of reducing them.

“As carbon emissions were free, engineers optimized efficiencies in production and performance with zero regard for emissions other than trying to be fuel efficient. Had carbon been priced, consumers would also have opted for cleaner products because they would be cheaper relative to the more costly high-carbon-intensity products,” according to Oliver.

There now exists a price for carbon in many countries, with several cap-and-trade programs already established and many more working to come online, but the rate of change needed and the capital required to do so is enormous. About 40% of global emissions are currently covered under cap-and-trade programs and governments, regulators, and corporations are all making commitments to halve emissions by 2030 with a goal of net-zero by 2050, and it’s positioning the world to close the “short” that it’s been in regarding carbon for over a hundred years.

“Further, because we have delayed action for decades, the unwind of this ‘biggest short’ will have to be aggressive and powerful, driving growth opportunities for those positioned appropriately. This could feel a lot like the biggest short squeeze in history,” Oliver wrote.

Investing for the Carbon Transition

Ensuring your portfolios are positioned on the right size of this squeeze and the impending capital cycle related to the emissions transition should be one of the most crucial concerns for advisors in the coming months and years. KraneShares offers a suite of climate-centric ETFs with a variety of strategies and exposures.

For an approach that targets transitioning companies, the KraneShares Global Carbon Transformation ETF (KGHG ) seeks to capture the true potential within the carbon transition by focusing on companies from industries that are traditionally some of the highest emission offenders but are on the precipice of transitioning to renewable technologies.

Meanwhile, the KraneShares Electrification Metals ETF (KMET ) offers targeted exposure to the metals that will be necessary for the electrification and clean energy transition of the world’s economy in the pivot to net-zero emissions, and the KraneShares Electric Vehicles and Future Mobility ETF (KARS C)+ invests across the EV ecosystem to capture the growth in batteries, hydrogen fuel cell manufacturing, EV production, and more.