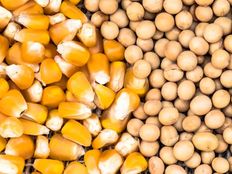 Commodities have been moving higher to start the new year, with significant movement in the metals, energies, and even agricultural markets.

While most people are familiar with the energy and metals markets, as crude oil and gold have often been the subject of headline news stories, agricultural products are less publicized. However, they can be explosive once investor interest is piqued, offering a potential place in an investor’s portfolio.

Chicago soybean futures jumped on Monday, bolstered by concerns that hot and dry weather could spell disaster for South American crops as they approach harvest time.

While wheat fell on Monday, dragged lower by a stronger U.S. dollar, most of the major agricultural commodities are getting a boost on Tuesday, with soybeans and corn leading the way.

The most active soybeans contract on the Chicago Board of Trade (CBOT) added 2.45% on Tuesday, amid rises in other futures like oats, corn, and wheat.

In Argentina, a lack of wet weather conditions could continue, potentially affecting over half of corn and soybean crops by next week, the Commodity Weather Group said in a note, although the impact on yield remains nebulous.

“Even with weather issues in South America, you’ve got a bigger crop than a year ago,” said Bill Lapp, an agriculture economist at Advanced Economic Solutions.

Increases in soybean futures were muted by the lackluster U.S. weekly export inspections, with 1.19 million tons of the oilseed exported the week that ended December 30, down 32% from the previous four-week average and below analyst estimates.

“Soybean inspections were the lowest since late September,” said Terry Reilly, a senior analyst at Futures International. “Some people were a little disappointed with that.”

Meanwhile, corn is also surging on Tuesday, up more than 3.14%, amid news that a leading global corn producer has observed steady prices for the past few months on demand from China and harvest delays, despite bumper crop projections.

Adding to potential bearish cases for corn, the world corn balance also appears to be more significant than it was last year, putting downward pressure on the global corn market. The U.S. Department of Agriculture, or USDA, estimated the world’s 2021–2022 corn production at 1.208 billion metric tons, 8% higher from the previous year, with the ending stocks rising by 4% to 305.5 million metric tons, according to its December World Agricultural Supply and Demand Estimates, or WASDE, report.

Interestingly, however, the prices remained steady in the Ukraine after harvest delays, resulting in a dearth of supply in ports and a decent demand from China, also positive for boosting futures prices.

China is a huge consumer of the commodity, with the country importing 3.3 million metric tons of corn from Ukraine in October through December, and being set to import around 700,000 metric tons in January, according to logistic companies and market sources.

China is expected to keep importing corn from Ukraine in the first half of 2022, according to sources, with total MY 2021–2022 corn imports from Ukraine likely to amount to 6–7 million metric tons. “It seems like right now China’s still likes the label non-Genetically Modified corn. So that’s why Ukraine still kind of sits pretty well,” said Matt Ammerman, commodity risk manager, vice president of the Eastern Europe/Black sea region with Stone X.

Ukraine is not the only supplier of the commodity, however, and will also face competition from Argentina in the first half of 2022, as the South American nation supplies Middle Eastern destinations in particular. The harvest is expected to start in mid-February to March in Argentina. “Argentina, on the other hand, is likely to be a strong competition to Ukraine given the price benefit,” Ammerman said.

Corn crop conditions in Argentina have been worsening due to arid and overly hot weather conditions, and only 58% of crop was reported to be in good to excellent conditions as of December 30, according to Buenos Aires Grains Exchange, or BAGE.

Other factors that could increase crop prices include the rising cost of fertilizers worldwide as supply chains continue to suffer amid the coronavirus pandemic.

In the Ukraine, the cost of cultivating corn is likely to increase by roughly 30%, sources said, leading to some reductions in fertilizer usage.

Farmers, however, may have some relief this season amid high corn prices, said Elena Neroba, a market analyst with grain trading firm Maxigrain, allowing them to continue to purchase needed fertilizer supplies.

For investors looking at ways to buffer inflation, commodities may also be beneficial for inflationary periods, according to experts, making them a valuable hedge against the recent surge in the prices of goods and services over the last year.

It should be noted, however, that futures are volatile. Agricultural ETFs may offer better opportunities as short-term plays for savvy investors with the proper risk profile.