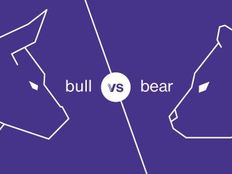 Bull vs. Bear: Is This the Time for Industrial Metals?

Bull vs. Bear is a weekly feature where the VettaFi writers’ room takes opposite sides for a debate on controversial stocks, strategies, or market ideas — with plenty of discussion of ETF ideas to play either angle. For this edition of Bull vs. Bear, Nick Peters-Golden and Evan Harp debate the investment case for industrial metals.

Evan: Morning, Nick! Last week, a trailer for a new Armored Core game dropped at the Video Game Awards, which, in my book, reads as an invitation to argue with a good pal about industrial metals. Judging from that tastefully done Affleck-esque back tattoo you have that features a bull lifting weights above “I Live For Industrial Metals,” I take it you are a bull?

Nick: Morning, Evan! Yes, I am quite the bull on industrial metals; I got this sick tat back in February when that sweet, sweet copper hit $4.90 per pound.

I’m a bull because the modern economy runs on industrial metals; from batteries to cars, huge facets of our everyday life rely on copper, aluminum, and other base metals.

Evan: The only tattoo I have is an image of my left elbow in a mirror on my right elbow. It was painful, expensive, and nobody ever compliments or even notices it.

It makes a lot of sense that you got your tat in February, considering that industrial metals were (figuratively) falling apart by July.

Part of the problem right now is that a confluence of factors has made the industrial metal space quite wonky. For starters, demand was artificially inflated in the early days of the pandemic, and the correction for that is ongoing. Industrial metals also have a rather dire headwind in the form of the energy crisis. Smelting industrial metals into usable substances takes an enormous amount of energy — and Europe is facing an energy crunch amid what could be a brutal winter and the fallout from Russia’s ongoing invasion of Ukraine. Meaning, there just won’t be as much demand for them coming from traditional sources.

Nick: You’re right, the landscape is changing, and people are waking up to how significantly constrained the copper supply is — and that means opportunity for big price hikes in spot industrial metals. I actually think that industrial metals prices are facing a humdinger of a tailwind from the energy crisis. That’s seeing smelters close, cutting supply and driving prices up. Now’s the time to get into industrial metals, and you can see it’s time in Europe’s struggle to keep the lights on.

Evan: Yes, an energy crisis is making it harder to smelt metals, but that same energy crisis is driving a push into renewables that is fueling medium-term demand. Meanwhile, copper smelting output managed to rebound some last month worldwide, while the industry waits to see how the dust settles in Europe.

At least for copper, it’s reasonable to expect future prices will fall as more supply comes online. While just two major copper mines were brought on stream in the four-year window between 2017 and 2021, according to the International Copper Study Group (ICSG), four are arriving onto the map almost simultaneously.

The ICSG estimates that copper mine production globally grew by 3.5% for the first nine months of 2022, compared to just 1.9% over the whole of 2021. This is all before those four aforementioned mines come online.

Nick: That’s all well and good, but it’s clear that those mines won’t be nearly enough. Mining firm Glencore (GLEN.L) has been in the news sounding the alarm that they’re seeing a 50-million-ton supply shortfall by 2030.

What’s more, the mines that are coming online are great, but it’s still very expensive to develop, build, open, and operate mines. The Fed isn’t finished with its fight against inflation, and if the “higher rates for longer” regime is true, and CEOs are right that a recession is coming, it will be even harder for mining companies to get digging.

Evan: But ultimately, demand and prices are linked, with other industrial metals like aluminum and steel deeply dependent on Chinese demand to reinvigorate their respective subsectors. Though the Chinese government looks to be reopening and relaxing COVID protocols, emerging markets in general seem mired in a slump they haven’t been able to escape.

Every year, someone pens a “this is the year emerging markets break out” take, and every year a (metaphorical) Lucy pulls the football away and emerging markets end up flat on their back. There’s no reason to think 2023, with all its macro-economic dangers and global recession whispers, will be the year for emerging markets.

Even the biggest emerging market, China, has a number of flags on its prognosis — especially now that it isn’t hard to imagine that protests could flare up again, which could impact the economy. The government is going to have a hard time responding to protest, and there’s risk of international isolation and withering economic conditions. Additionally, a radical policy shift is going to take time and effort to implement, and there could be hiccups along the way.

I would be reticent to make any investment that relies on stability in China to be successful.

Nick: I can see how that kind of double threat poses a real challenge to price growth for copper and friends. But according to Goldman Sachs’ metals strategist, prices are set to exceed their record high.

Yes, emerging markets won’t be driving copper prices up too much next year, but it’s still all about China. Just because supply is tight as a vise doesn’t mean that demand is going away — those same protests you mention will push the Chinese government to invest to address the increasingly concerning cost of housing there. As more homes get built to ease the crunch, that can only push copper and other industrial metals even higher. We’re already seeing housing firms’ stocks rise in response to anticipated housing construction and growth.

Evan: Much like the French Emperor of Mexico, that medium-term bullish case for 2023 industrial metals is likely to be forgotten by history amid the many headwinds that could thwart it. Inflation may be subsiding somewhat, but it is likely to hang around at higher levels than we’re used to for quite some time. I anticipate housing construction to slow down, not increase, in 2023, which is another headwind for industrial metals. This is in part due to rising home costs making them unattainable purchases for many, but it is worth noting that there are currently 17 million vacant homes in the U.S. And while Chinese stocks are rebounding right now, China is still part of the world, and the overall global economic forecast is gloomy.

Do you know what else comes with gloomy economics? Cheap copper. Copper is often seen as the economic canary in the coal — err, copper mine. It is in so much stuff that when economies are growing rapidly, copper prices shoot up. When economies are contracting, prices tank. I certainly wouldn’t be bullish on the global economy in the near term; ipso facto, I am bearish on copper.

Nick: Where some see inflation hanging around for a long time, there is historical precedence for a boom-and-bust cycle following a serious global economic displacement that created a lot supply chain-related inflation: the years after World War II.

That’s what Morgan Stanley’s chief investment officer noted recently, that things in 2023 will be volatile, but with ups and downs. He pointed to the drop in the M2 money supply growth rate, including things like cash and checking deposits, from 27% at the start of 2021 to just 2.5% today, possibly indicating a slowdown for inflation.

Volatility isn’t necessarily great for earnings sheets, but it isn’t the same as a dark cloud of stagflation looming over the whole market. There are going to be boom moments in the near term, too, and for all the reasons above, industrial metals can be a part of them.

Even if you’re worried by China or emerging markets, housing construction worldwide can be a driver. China may have challenges — which I think are transitory rather than structural — but if you’re not convinced by China, the global construction sector is going to grow by almost $4 trillion in the next two years.

Investors who want to make industrial metal plays when they boom should check out the abrdn Bloomberg Industrial Metals Strategy K-1 Free ETF (BCIM ) or the United States Copper Index Fund (CPER A-).

CPER, meanwhile, is specific to its namesake, tracking the SummerHaven Copper Index – Total Return. While it is more expensive at 85 basis points, it uses a roll methodology designed to maximize backwardation and limit the negative impacts of contango and puts 100% of its weight towards copper itself.

Evan: You’ve given me a lot to think about, but I believe demand destruction remains highly likely and that we aren’t going to see much growth in construction. Aside from headwinds from inflation and degrowth, the importance of ESG is going to put miners in an even more challenging position.

Copper miners have been in a bear market forever — and now must contend with political unrest and the impact of climate change, which miners are ill-prepared for. Mining sites are vulnerable to flooding and weather-related catastrophe. This all adds to an industry that is in a precarious position, unprepared to take advantage of tailwinds, and facing a number of headwinds.

But I’ll leave you with some industrial metal I’ll always be bullish on — goth dance music.

Nick: Perfect. Dance on, readers! Thanks for chatting with me today, Evan — until next time.