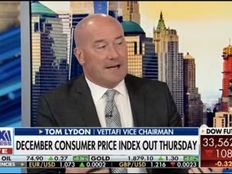 Lydon Optimistic About Inflation on Mornings With Maria

Inflation appears to be continuing to drop, with year over year inflation coming in at 6.5%. Despite the drop being good news, 6.5% remains an historically high level of inflation. “It is high, but if you look at the month over month numbers we’re going to have less than single digits. I think that’s something,” Lydon said.

Advisors have indicated in VettaFi surveys that they generally feel the Fed is on track to keep inflation under control and sidestep a heavy recession. “It’s really all about the data right now,” Lydon said, continuing, “and if you look at the long tails, the extremes, ‘are we going to have a tough recession or is inflation going to get too out of control?’ Advisors are not feeling that.” According to Lydon, advisor sentiment is somewhere in the middle, and as such they are putting money back into the market.

Despite the relatively good news on the inflation front, consumers are still feeling the bite of inflation at the grocery store. Lydon noted, however, that wage growth has come up considerably. “But still, it’s tough if you are a young couple and you are raising kids and you have to put food on the table or fill up your tank — you feel for that group of people,” Lydon said, observing that people in the middle class or who have more money are weathering inflation better.

Though a bumpy road ahead seems likely, Lydon encouraged optimism. “After a year of down equity markets, down fixed income markets — which we haven’t seen collectively for over 40 years — there’s a lot of room to be optimistic.”

Overall, Lydon asserted, many advisors feel like though the Fed was late to the party on addressing inflation, they’ve been doing a good job, according to the data coming into VettaFi’s surveys. “Going forward, it’s all about data.”

For more news, information, and analysis, visit the Commodities Channel.