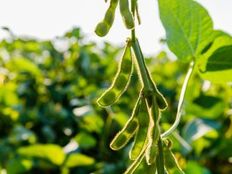 Watch This Soybean ETF as China Looks at Imports

China plays a vital role in the prices of soybeans as one of its largest importers compared to other countries around the globe. The second-largest economy forecasts that soybean imports will eventually decline as it looks to wean itself from dependence on other countries for the commodity.

The move could help stabilize soybean prices, but the overarching theme is that prices could continue to rise.

“The China Soybean Industry Association (CSIA) predicted that soybean imports in October may fall to a two-year low of about 5 million tons as the nation aims to reduce reliance on imports to stabilize supplies and prices amid falling US soybean exports,” a Global Times report noted.

As the U.S. Federal Reserve looks to get inflation under control, soybean prices could remain high through the rest of 2022. As such, investors looking to hedge against inflation may want to look at exchange-traded funds (ETFs) that focus on the commodity, such as the Teucrium Soybean Fund (SOYB B).

The fund could be used as a portfolio diversifier when it comes to getting exposure to alternative assets. Additionally, traders can use it to get tactical exposure to soybean prices that, as mentioned, could remain elevated.

Hedging against inflation has been the prevailing trend for most of 2022 as the U.S. Federal Reserve continues raising interest rates to keep consumer prices under control. As such, getting commodities exposure like soybeans remains a strategic move to protect portfolios via asset diversification.

Just when it seems like inflation may have hit a peak, more market news says otherwise—as such, getting commodities exposure is still ideal in the prevailing market.

“Federal Reserve officials expressed concern at their meeting last month the persistence of high inflation, underscoring their intention to continue raising interest rates in large steps despite the pain that could cause,” a Wall Street Journal report noted.

The expectation of further rate hikes by the capital markets seems to fall in line with what the Fed is also forecasting.

“Policymakers revised higher their expectations for rate increases, though some signaled caution about overdoing them amid risks of economic and financial volatility, according to minutes of the Sept. 20-21 gathering released Wednesday, the report added further.