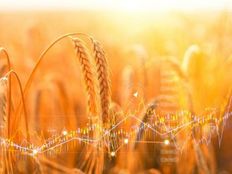 Among the fastest-growing ETFs, this year are managed futures, U.S. dollar, floating rate ETFs – and wheat.

The Teucrium Wheat Fund (WEAT C) has grown 394% year to date through October 5, making it the ninth fastest-growing ETF in 2022, according to a recent Tweet from Athanasios Psarofagis of Bloomberg. To make the list, funds had to have at least $50 million in assets under management as of December 31, 2021.

WEAT began the year with $76 million in assets under management and has grown to $373 million as of October 5. The fund has taken in $372 million in inflows year to date, according to Psarofagis.

WEAT offers an easy way for investors to gain exposure to the price of wheat futures in a brokerage account.

Wheat futures prices leaped to their highest level in two months in September due to drought in the plains, resulting in U.S. growers reaping their second-smallest wheat crop in 20 years, according to Morningstar.

The smaller-than-expected harvest exacerbated the disruption of grain flows due to the Russian invasion of Ukraine. Prior to the war, Ukraine was a top five global exporter of both corn and wheat. According to Teucrium, Eastern Ukraine consists of some of the most fertile soil on the planet.

The price of wheat futures began to rise even before geopolitical tensions escalated this year, as global supply chain constraints, the increasing cost of fertilizer, and labor shortages weighed on production.

Wheat prices have a historically low correlation with U.S. equities, making WEAT a potentially attractive option for portfolio diversification, particularly in the current environment in which U.S. equities have underperformed.

Investing in commodity businesses can be highly volatile, and revenue and profitability can change quickly due to market prices of basic goods. Nevertheless, with inflation a major concern among investors right now, adding small portfolio exposure to wheat might make sense.