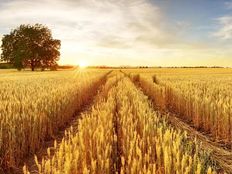 Among the best-performing non-leveraged ETFs of Thursday, the Teucrium Wheat Fund (WEAT C) jumped 14.7%. Meanwhile, CBOT wheat futures were 7.1% higher to $11.34 per bushel.

Wheat prices broke above $10 per bushel for the first time in over a decade on Thursday as the supply shortfall could extend well into the next season or longer, Bloomberg reports.

Many Ukrainian farmers have exchanged plow shears for AK-47s as they take up the defense of their country, so they won’t likely be planting spring crops as usual. Meanwhile, basic infrastructure is being damaged by the war, which takes a more long-term toll on the economy, hampering future transportation of exports.

“The market is pricing in lost trade coming from the Black Sea region,” Arlan Suderman, chief commodities economist at StoneX, said in a note. “But it hasn’t yet started to factor in a year of lost production from Ukraine.”

Major global wheat producers won’t likely pick up the slack, with International Grains Council (IGC) data showing that stocks in major wheat exporters are on pace to hit a nine-year low of 57 million metric tons by the end of the 2021-2022 season, Reuters reports. They now make up just one-fifth of global inventories, and, with world consumption at around 781 million metric tons, current inventory levels would only feed the world for just 27 days.

If Russia and Ukraine are excluded, major exporters would make up for 16% of global stocks, or enough wheat for less than three weeks.

“You need to look at what’s available,” Dan Basse, president of Chicago-based consultancy AgResource, told Reuters. “If someone has a problem, there is surely not enough supply.”