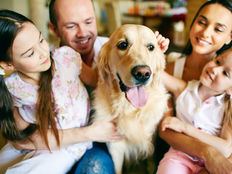 As a number of global market trends quickly develop, investors can look to targeted exchange traded funds to tap into these growth opportunities.

“The ensuing disruption is also creating winners and losers across the investment landscape,” Hyman added. “In fact, these changes are creating opportunities that cut across traditional segments such as geography, market capitalization, sector or industry.”

For example, the U.S. is witnessing a proliferation in pet ownership. According to the American Pet Products Association (APPA), around 68% of U.S. households have pets, compared to 56% in 1988. There are even more households that have pets than have children.

Generational trends are behind the rise of pet ownership, notably the baby boomers and millennials demographics. A decade ago, only 34% of people over 70 had pets, but as baby boomers began to cross into their 70s, the percentage has reached 40%. Meanwhile, millennials are becoming pet owners before, or even in place of, having children.

Additionally, similar trends are happening across Europe as well as in the emerging markets, including China, India, Southeast-Asia, Latin America, with the rise of disposable income and a growing middle class.

“If these generational trends continue, boomers and millennials could drive pet ownership for decades to come,” Kieran Kirwan, Director of Investment Strategy at ProShares, said.

The loyal companionship has created a big business segment. The U.S. pet care industry has expanded steadily since 2001, even through the Great Recession, and it has experienced twice the percentage growth of GDP since 2007. Global pet care industry sales was $132 billion in 2016 and are projected to increase to $203 billion by 2025. Breaking dome some of the numbers, an estimated $18 billion was spent on veterinary care in the U.S. over 2018, there is an average $30 billion in annual spending on dog food alone, 43% of owners buy on impulse for their pets and 79% believe the quality of their pets’ food should match their own.

ETF investors can look to targeted ETF strategies such as the ProShares Pet Care ETF (PAWZ) to capture the growth in the pet care industry.

In the infrastructure space, there is a never-ending need for investments to update or repair aging communication, transportation, water and energy networks. According to American Society of Civil Engineers, existing U.S. infrastructure is crumbling and in need of major investment

“It’s important we understand that it’s a global opportunity. While here in the States we are just starting to embrace the notion of investing in infrastructure, investors in Canada, Europe, Australia and the developing world have viewed this asset class as a potentially attractive opportunity,” Kirwan said.

As infrastructure investments have been receiving renewed attention, the theme is benefiting some ETFs, like the ProShares DJ Brookfield Global Infrastructure ETF (TOLZ ). TOLZ focuses on companies whose assets include airports, toll roads, ports, communications, electricity distribution, oil and gas storage and transport, and water in both developed and emerging markets.

Additionally, the surging growth in online retail also opens up another opportunity in an advancing digital age.

“What’s does retail’s future look like? Shopping is going digital,” he added.

Online retail has been rapidly expanding. Global e-commerce sales doubled between 2014 and 2018 to $2.8 trillion annually from $1.3 trillion. By 2020, an estimated 2 billion people are expected to be digital shoppers, or a 19% jump from 2018 levels, as more people, notably from emerging economies where barely half the population is online, gain access to the internet. Almost one-third of consumers are already shopping online at least weekly and 75% at least once a month.

Online retail is still in the early stages of a long-term trend. Online percentage of global retail sales is currently about 12%, but it is projected to rise to 17.5% of total sales and surpass $4 trillion annually by 2021.

With the increased popularity of e-commerce and the decline of traditional brick-and-mortar shops, investors can also capture this growing trend through a fund like the ProShares Online Retail ETF (ONLN), which provides exposure to online retailers.

Financial advisors who are interested in learning more about sector investment ideas can watch the webcast here on demand.