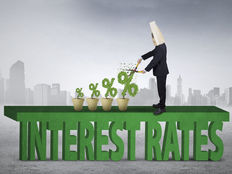 Deutsche Bank’s Matthew Luzzetti and LPL Financial’s John Lynch appeared on CNBC’s “Squawk Box” on Monday to discuss some predictions concerning the market, and what else they are watching for during this trading week.

With low rates, and a slowing economy in general, Luzzetti is predicting three more Fed cuts before the end of 2019 (with another in Q1). With this in mind, he believes a more important question comes as a result of the intensified trade tensions that are impacting both the US and China.

“Are additional rate cuts into that environment going to be effective?” Luzzetti asks, also noting that as the ISM Manufacturing Index is sending ominous signals about manufacturing and CapEx, the Fed is taking some insurance against this.

As clarified again, Luzzetti states how he believes the Fed will cut at each of the meetings coming in September, October, and November. With regards to the possible cut that will come in Q1 of 2020, ideally hoping to have inflation rise above 2%, Luzzetti is asked if the Fed would try to get ahead of things by cutting by 50 basis points sometime sooner.

Luzzetti states, “It’s possible, and you’ve seen a bit of a dovish shift even in the more hawkish member.” However, he notes, “I think the data just hasn’t slowed enough at this point to get consensus on the committee for 50 basis points in September.”

Trade Uncertainty Is A Key Driver

Shifting gears to a new question, Luzzetti is asked about thoughts on there being only one in three-quarters of GDP growth next year, going into the election. He explains the cause is CapEx. “Trade uncertainty is a key driver. If you look at the leading indicators, their export orders have plunged, and they’ve been a very good lead indicator for CapEx.”

With the focus turning to whether or not President Trump is willing to have the GDP fall one and three quarters, amid a trade war, while going into re-election, Luzzetti makes it clear he does believe Trump can probably connect the dots and will eventually back off. However, the question then becomes whether or not it is too late and how fast growth could come back as a result.

Moving over to Lynch, the focus takes on a new shape concerning where to stick around as far as locating levels above where the US is right now in the S&P. Lynch, similarly, believes the CapEx is vital.

“We’ve got this trade uncertainty going on, but we still have immediate expensing of a 100%. We have the repatriated assets that have largely… a third of them still need to be invested in CapEx it would appear,” Lynch states. On an industrial standpoint, where an overweight is still maintained, clarity on trade is not going to come anytime soon. Early 2020 is more likely in this regard.

Related: Is The Fed Placating The President Or Is A Rate Cut Warranted?

As far as Trump is concerned, Lynch believes clarity will be important not only for possible re-election but a stronger economy for 2020, which is more important.

In discussing how the multiple stays where it is, and basing things on where the S&P earnings come in, Lynch explains, “I think all too often investors get hung up on a 16.5 or 17 historical PE, and I think the PE needs to be looked at on a relative basis; relative to the 10-year Treasury or inflation.”

He continues, “If you look at the 10-year Treasury yield at about 675 since WWII. So, if you can use the same historical data going back on the multiple, you need to use that on rates and inflation.”

Pointing this out, Lynch is noting how the plans to handle dramatically low market interest and inflation rates are acting in a relatively conservative manner, compared to the consensus.