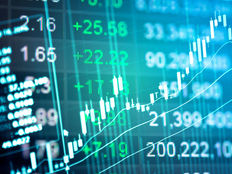 The results of the Federal Reserve’s Comprehensive Capital Analysis and Review, or CCAR, are in and the stage is now set for major U.S. banks to boost shareholder reward programs, including share buybacks and dividends.

That news lifted exchange traded funds, such as the Invesco KBW Bank ETF (KBWB C+), SPDR S&P Bank ETF (KBE A) and the Financial Select Sector SPDR (XLF A), among others on Friday.

“Big banks have had the best return-of-capital story of any industry in the past 12 months. The situation should get even better as they move ahead with widespread increases in dividends, plus big share buybacks planned for the year beginning July 1,” reports Andrew Barry for Barron’s.

Since the end of the global financial crisis, during which many stocks were egregious dividend offenders, the financial services sector has been a leader in terms of domestic dividend growth. That trend is expected to continue.

“KBW analysts wrote Friday that the ‘results were above our expectations with banks pushing payout ratios meaningfully higher versus our expectations.’ The median gross payout planned among 12 banks covered by the firm is 123% of earnings, up from 95% in the 12 months ending on Sunday, the year covered by the previous CCAR tests,” notes Barron’s.

KBE has a dividend yield of just 2.11% while XLF, the largest financial services ETF, yields just 2.02%. In either case, both funds’ components have plenty of room to boost dividends in significant fashion. It is widely expected major banks will engage in significant share repurchase efforts.

“The large buybacks will help support earnings per share at a time when banks face some pressure on their net interest margins from declines in rates,” according to Barron’s. “Many of the big banks will have total yields, defined as dividends and stock buybacks as a percentage of their market values, of 10% to 15%. Wells Fargo (WFC) will lead the pack at 15%.”

Dow component JPMorgan Chase & Co. (JPM) is expected to launch a buyback effort above and beyond previous estimates.

“Highlights among the big banks included a plan by JPMorgan to buy back as much as $29.4 billion of stock, far more than the roughly $21 billion investors expected,” notes Barron’s. “The country’s top bank by market value plans to boost its quarterly payout to 90 cents to 80 cents, resulting in a yield of 3.2%.The increase was in line with expectations.”