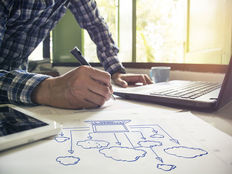 The ProShares S&P 500 Aristocrats ETF (NOBL A-) could get a new addition next year and it very could be International Business Machines Corp. (IBM), a member of the Dow Jones Industrial Average.

NOBL tracks the S&P 500 Dividend Aristocrats Index, a benchmark that only includes companies that have boosted dividends for 25 consecutive years. Dividend growth strategies, including NOBL, often feature exposure to the quality factor and a recent analysis of NOBL’s underlying index confirms as much.

Assuming IBM raises its dividend next year, that will be 25 consecutive years of higher payouts, meaning the stock qualifies for admission to NOBL’s index.

“Dividend forecasts compiled by Bloomberg show that the technology giant is poised to join the list of so-called Dividend Aristocrats, companies that have increased their dividend in 25 consecutive years, in 2020,” reports Bloomberg.

The consumer staples and industrial sectors combine for nearly 45% of NOBL’s weight.

“Looking beyond the aristocrats, energy firms were the biggest contributors to dividend growth in the second quarter of 2019,” according to Bloomberg.

Due to some dividend cuts in the energy sector several years ago during a bear market for oil, the sector accounts for just over 3% of NOBL’s roster.