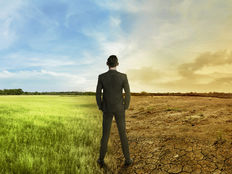 Changing Up The ETF Landscape With Ameritrade Buyout

CNBC’s Seema Mody took a segment on ETF Edge to go into the huge merger that was Charles Schwab (SCHW) buying TD Ameritrade (AMTD) for $26 billion.

Tim Seymour of Seymour Asset Management is on hand to go over some of the broader implications for the ETF landscape based on this movie. He explains how he believes ETFs and a transaction like this is about consolidation of any compression of expenses and fees. This has been going on for the last couple of years with ETFs. The bigger players grow, and it’s harder for the smaller ones. That’s what’s behind this deal.

Turning to ETF.com’s David Nadig, who addresses the nature of this deal, he states that it certainly has a lot to do with the removal of commissions from retail investors. This was a move Schwab made, starting this battle, to begin with, leading others to follow, and disproportionately hitting TD.

The reason is that TD was making more money off commissions than any of their other big online brokers. Schwab was making the least, so it wasn’t much of a giveaway to stop charging. Clearly, this hurt TD’s stock, allowing Schwab to come in at a low price.

“The end result is a powerhouse that’s going to be a $100 billion firm, twice the size of Bank of America and Merrill Lynch,” Nadig stated. “And they’re going to have proprietary ETF products, proprietary Robo advisors, and the biggest advisor network in the world.”

What About Retail Investors?

In terms of what this means for retail investors, Seymour explains that he believes brand is everything. It plays a role in many sectors. By combining these two companies, Schwab was able to buy brand and stickiness, so now there is $5 trillion in assets. There was a tactical play in the lead-up, and it paid off well.

Seymour continues, “Ultimately, the ETF world is one where you continue to see also the big get bigger, and I think the ability of these players to get into that space or continue evolving in that space is what is going to be very interesting.”

As far as whether or not the deal gets approved by regulators, Seymour believes Schwab is competing against money center banks. With their balance sheet focused on home equity and extending collateralized loans, they’ve been able to compete online, pulling in those assets. This should make them fine.

Considering what it means for the banks, Nadig states that if it were a bank merger, there’d be a lot more scrutiny. With that in mind, he believes this will sail through, and Schwab could become a default banking provider in this country. A lot of individual investors use Schwab as their bank, and that’s not been the best-run business for TD, despite being owned by a large bank.

Watch All The Thoughts Regarding This Merger