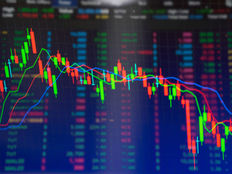 “Built Ford tough” is the familiar moniker for automaker Ford’s trucks and in the current hailstorm of market volatility, it’s exchange-traded funds (ETFs) that have been weathering the storm thus far as an investment vehicle. “Built ETF tough” could be circulating through the capital markets once the coronavirus effects boil over.

“This has actually been a great victory for ETFs as a structure. Everybody’s been concerned in the mainstream media that a big volatility spike like this would unravel some part of the market we didn’t understand. In fact, the opposite has happened,” said Dave Nadig, chief investment officer and director of research at ETF Trends. “ETFs have delivered like champs here. We’ve had no major breaks. Even with the circuit breaker hit [Monday], the reopen off that circuit breaker was, frankly, flawless.”

With bonds as being the safe haven default, particularly in this frenzied market, fixed income ETFs have also helped to bring stability. With the ability to get bond exposure without purchasing the actual debt issues themselves, investors’ flight to safety is accelerated.

One of the more liquid bond funds ETF investors can look to for core exposure is the iShares Core U.S. Aggregate Bond ETF (AGG A+).

Cohen and Nadig also agreed that ETFs could serve as an accurate price predictor. For example, the iShares Core S&P 500 ETF (IVV A), which tracks the benchmark S&P 500 Index, was able to hint that the circuit breaker would be tripped ahead of the raucous market opens last week.