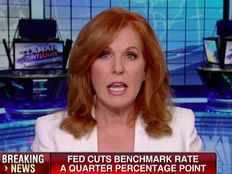 During the “The Claman Countdown” on Fox Business Network on Wednesday, ETF Trends CEO Tom Lydon discussed the Fed’s interest rate cut made earlier in the day.

Part of this discussion led by anchor Liz Claman was focused on the lack of clarity concerning rate cuts in 2020. While not sure of what will take place, there is a high chance of seeing at least one more cut.

Investing in diverse, high dividend yield ETFs on the S&P will be good bets for the next six months. The level of safety they provide, in the midst of trade wars and tariff changes, is a good thing to keep in mind.

“The small and mid-caps are the ones that have the least exposure to international clients, customers, and gyrations,” Claman notes.

Putting the attention on Lydon, Claman asks about which ETFs should be getting the attention in the midst of the news concerning these rate cuts. Lydon explains how looking overseas shows great opportunity in foreign equities, particularly if the dollar is going to be a bit higher.

“So, we got a stronger dollar. It’s forced evaluations down… in a big way. However, here in the US, a lot of money has been going into longer duration bonds and actually less credit quality bonds; into corporates and into high yields, where we’re probably going to have one or two more rate cuts from before,” Lydon states.

He explains how last year was different. Rates were tightening, as the US was in a credit squeeze to an extent. During that time, everyone was shortening up duration. Now, it’s safer to go longer. Billions have gone into high yields and corporates.

Joining the conversation was Federated Investors’ Chief Investments Officer Steve Auth, who put in his remarks regarding Fed Chairman Jerome Powell’s decision to cut a quarter of a point. He noted his hope to see a cut closer to 50 basis points, and then talk about organically expanding the balance sheet again.

The market to go up as a result of this. However, Auth expects Powell and the Fed to do both those things over the next couple of quarters. By this logic, Auth believes the market has essentially settled itself out.

“This is a good environment for equities. You’ve got rates coming down, the long-term bond yields come off in the last five years, over a percent. There’s been no move up in evaluations on equities because people are worried about a recession that’s not coming,” Auth explains.

Getting through the end of the year, Auth believes there’s another leg up in stocks. In describing this bull market that’s lasted over a decade, Auth notes how the US is in a secular bull market.

When talking about dividends, there’s also conversation concerning whether it’s time for dividend plays. They have become very popular. It may be because they are not at peak valuation, even after the July interest rates cut. Keep in mind, this concerns more defensive, stable, lower volatility stocks that will pull through during the next 6-9 months of uncertainty and higher volatility.

With the S&P slightly positive and the Dow very positive on a messy day concerning market action below the flatline, Lydon points out how the Fed cut met everyone’s expectations.

“We end up flat after coming back 200. The Fed did exactly what it was expected to do,” states Lydon.

Auth adds he likes the market here and there’s no reason to fight the Fed, who are in easy mode, with certainty there will be more cuts.