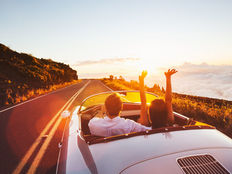 With revised GDP numbers, the consumer discretionary sector, which has been driving the economy for some time now, is in focus.

“XLY, of course, is the sector-wide consumer discretionary sector. It has been out-performing the S&P year to date by 2 to 3 percentage points. But within it, retail is kind of driving that. The (RTH) is a retail index. It has things in it like Walmart, which is technically in consumer staples within the S&P. But it shows you that Domestic retail spending has been strong. Of course (XHB), home-related, home-building, and home-improvement. (HD) is the second-largest stock in the * (XLY). *(CARZ C+), is the global auto ETF. Obviously been a laggard. The good news there: GM and Ford together make up only 4% of the XLY. So it’s kind of hit or miss. Media also used to be in consumer discretionary—not really anymore. So you’re kind of left with this grab bag of restaurants, retail holding things up. Anything that seems more big picture, durable goods, autos and things like that, not as much, unless it’s houses,” said Mike Santoli on CNBC.

Watch the discussion surrounding the consumer discretionary sector on CNBC: