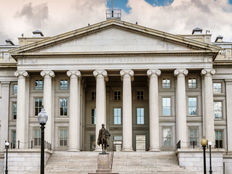 Last week, the Federal Reserve lowered interest rates by 25 basis points and left the door ajar for another rate cut later this year. But even as rates fall, investors may still want to consider rate-hedged fixed income strategies, such as the ProShares Investment Grade—Intr Rt Hdgd (IGHG B-).

IGHG tracks the performance of the Citi Corporate Investment Grade (Treasury Rate-Hedged) Index with long positions in investment grade corporate bonds issued by both U.S. and foreign domiciled companies. This is particularly important during market downturns when the propensity for a company to default on its debt is higher. As such, IGHG focuses on investment-grade issues to reduce credit risk.

“With expectations of a Fed rate cut running high, many investors have dismissed the risk of rising interest rates. However, history shows that the majority of times the Fed has cut interest rates, longer-term interest rates—such as the yield on the 10-year U.S. Treasury—have actually risen,” according to new research from ProShares. “The stage may be set for fixed income strategies with an interest rate hedge to perform.”

Consequently, these rate-hedged bond ETFs do not have to sacrifice their attractive yields when limiting their sensitivity to rising rates, allowing investors to still generate income without having to move down the yield curve. By hedging away rate risk, bond investors can focus on the underlying debt securities without fear of the negative effects of rising interest rates, maintaining their current level of income generation and potentially capitalizing on the tightening credit spreads.

“After May’s stunning rally in U.S. Treasurys, interest rates are extremely low—and this could mean that it’s a good time to think about a hedge,” according to ProShares. “Consider this: The yield on the 10-year U.S. Treasury now stands about 2%. With the core consumer price index (CPI)—the CPI minus energy and food prices—still running around 2%, the real rate is now near zero. For those thinking that recession could drive Treasury yields even lower, keep in mind that the all-time low yield on the 10-year U.S. Treasury was just under 1.5%, so even in that scenario, the upside is likely limited. The long-term average 10-year Treasury yield is around 6%, so the risk is tilted toward higher rates. And when interest rates rise, bond prices fall.”