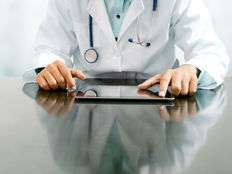 Don’t Put Off Healthcare ETFs Because of Election Year

It’s not a stretch to say nearly everyone knows that 2020 is a presidential election. It’s also fair to say that plenty of advisors and investors know that election years can weigh on the healthcare sectors and the related ETFs.

The Health Care Select Sector SPDR ETF (XLV A), the largest healthcare ETF by assets, is up an impressive 2.43% year-to-date and investors may want to consider giving the fund another glance despite this being an election year.

“Political polling numbers have already impacted market returns in health care. Many Democratic presidential candidates are campaigning on large-scale health care reforms at a time when drug pricing, insurance plan coverage and the opioid epidemic are at the forefront of legislative discussions,” said Matthew Bartolini, Head of SPDR Americas Research, State Street Global Advisors, in a recent note. “That said, even if a Democratic candidate who campaigned for “Medicare for All” wins the election, the chances of passing the legislation in the near term are unlikely as long as the Senate is controlled by Republicans.”

Healthcare and technology sectors are expected to raise earnings this year by roughly 10%, compared to the mid-single digits gains for traditional dividend-generating segments like utilities and REITs.

“Despite the likelihood of legislative gridlock, markets are reacting. Massachusetts Senator Elizabeth Warren and Vermont Senator Bernie Sanders are the more progressive candidates regarding health care reform,” notes Bartolini. “The return on health care stocks has suffered as their polling figures have improved.”

That said, XLV has recently proven sturdy despite the momentum accrued by Sanders in Iowa and New Hampshire.

Healthcare could remain a key player running up to election time, as it is a hotly debated topic due to aging Baby Boomers and cost-cutting efforts by Congress. And if political pressure comes to pass, that negativity may be fleeting and pave the way for XLV to power higher as 2020 moves along.

“The current negativity towards health care sets the stage for the sector to potentially surprise to the upside, thanks to its fundamental backdrop combined with secular tailwinds,” said Bartolini. “Health care firms are expected to post the strongest earnings and revenue growth in 2019 of any sector, and over the past three months, analysts have been ratcheting up their 2020 earnings-per-share (EPS) estimates for the sector.”