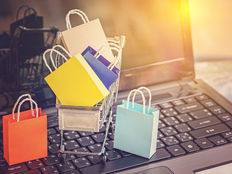 Early indications show that food comas on Thanksgiving couldn’t keep people from going online to do a little, or as data already suggests, a lot of shopping. Adobe showed online retail sales on Thursday will reach a record level of $4.4 billion.

The number would represent an 18.9% year-over-year increase compared to last year’s $3.7 billion. Thus far, sales have reached $2.2 billion with almost 50% of sales stemming from shopping on mobile devices.

Per a CNBC report, online retail shopping has “become increasingly important for retailers in recent years as consumer trends have shifted from shopping at physical stores to buying products from their phones or computers. Companies such as Amazon, Walmart and Target have benefited from this shift.”

“The strong online sales performance to-date suggests that holiday shopping starts much earlier than ever before,” said Jason Woosley, vice president of commerce product and platform at Adobe, in a statement.

“What will be important for retailers to track is whether the early discounts will drive continued retail growth overall, or if they have induced consumers to spend their holiday budgets earlier,” Woosley added.

Retail stocks are already shining stars as the major indexes have been reaching record highs amid optimism that a U.S.-China “phase one” trade deal will come into fruition.

According to the CNBC report, “Amazon—a perennial darling on Wall Street—is up 21.1% this year while Walmart and Target have surged 27.5% and 90.5%, respectively. Others such as Kohl’s, Gap and Macy’s have struggled as shopping continues to move away from brick-and-mortar retailers in favor of online shopping. Year to date, Kohl’s shares are down 27.2% while Gap’s stock has shed 34.4% of its value. Macy’s is the worst-performing stock in the S&P 500 in 2019, plunging 48%

Shopping for an Online Retail ETF?

The index tracks retailers that principally sell online or through other non-store channels. The index uses a modified market-capitalization weighted approach, is rebalanced monthly and is reconstituted annually.

Retailers may include U.S. and non-U.S. companies. To be eligible, retailers must: be classified as an online retailer, an e-commerce retailer, or an internet or direct marketing retailer, according to standard industry classification systems; have a market capitalization of at least $500 million; have a six-month daily average value traded of at least $1 million; and meet other requirements.