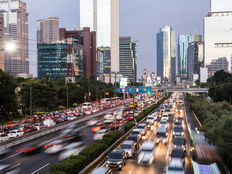 Why Emerging Markets Debt ETFs are a Solid Idea

With the Federal Reserve looking like it will hold off on raising interest rates this year and some emerging markets currencies rebounding, emerging markets debt exchange traded funds (ETFs), including the ProShares Short Term USD Emerging Market Bond ETF (EMSH A), could be solid ideas for income investors looking for some international diversification.

EMSH, which is higher by more than 2% this year, tracks the DBIQ Short Duration Emerging Market Bond Index. EMSH’s holdings are dollar-denominated, meaning those bonds stand to benefit as the U.S. dollar declines because financing that debt is easier when the dollar loses value.

“While the BRICS acronym has fallen somewhat out of favor in recent years, its constituents still garner considerable attention fitting the criteria outlined above,” reports Forbes. “For instance, the vast majority of the participants in Greenwich Associates’ recent emerging market fixed income study are actively investing in Brazil and Mexico, two of the largest economies in Latin America. On the other side of the Atlantic, South Africa (the S in BRICS) is popular with investors, as is Turkey given fourth-quarter 2018 concerns over it’s economy’s health.”

China, Brazil and Indonesia combine for over a quarter of EMSH’s geographic exposure.

“While the search for yield drove investor interest in emerging-market bonds over the past several years, now trade wars, a more valuable U.S. dollar, and rising interest rates are causing investors to rethink their investment approach,” according to Forbes.

Still, EMSH makes for useful income-generating tool for investors looking to mitigate duration risk. The fund has a 30-day SEC yield of 4.08% and a modified duration of just 2.44 years, according to ProShares data. EMSH holds nearly 50 bonds.

“There is nearly $8 trillion in local currency sovereign bonds outstanding, accounting for over 40% of the notional value of emerging market bonds outstanding,” according to Forbes. “Trading in these bonds accounts for between half and three-quarters of volume on any given day.”