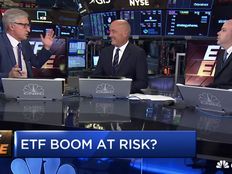 During the latest “ETF Edge” segment on CNBC, host Bob Pisani brought up the notion of ETF popularity possibly leading to their downfall. He questioned if they were becoming a victim of their own success, based on fee wars, active managers losing, and rising costs, which may lead to consolidation.

ETF Trends CEO Tom Lydon chimed in during the segment, stating, “We are going to see some consolidation, and we are seeing some M&A going on. We saw Guggenheim and Oppenheimer get picked up by Invesco. Everybody wants to be in the ETF space.” And Lydon continues, by noting that only a few publicly traded companies are very specifically in the ETF space.

Pisani pointed to things from a consumer perspective, asking if these changes in the ETF space make a significant difference to the average consumer, as opposed to an asset manager. Pisani asserted that there may not be, as the ETF world has too much competition to collapse suddenly, and it’s not about to go away.

Here, Lydon pointed out that it’s not going away, and the end investor is ultimately winning in the long run.

“This fee war has done great things for the average investor. More diversification, better tax efficiency,” Lydon said, also noting new non-transparent ETFs are coming to market, which has interest from 15 companies looking to launch funds. This only further highlights how a lot of people would like to be in the ETF space.

CFRA’s Todd Rosenbluth, also appearing during the segment, added his thoughts on why the ETF space has stood up.

He explained how there’s a set of companies including iShares and Charles Schwab that hold a vast majority of the assets and inflows going into their low-cost products. “95% of all new money in 2019 that has gone into ETFs and charged 20 bases points or less,” Rosenbluth added, noting any higher charge requires a unique product to hit the marketplace. “You have to stand out,” he said.