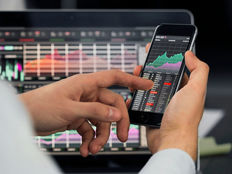 Last week, U.S. stocks reversed all the gains from Wednesday, to trade back below Thursday’s range amid impeachment and China trade deal woes, investors are wondering what happened.

Josh Brown, from Ritholtz Wealth Management, believes this is a normal part of the market cycle and there is little to be concerned about for stocks. ETFs like the Industrial Select Sector SPDR Fund (XLI A), the Financial Select Sector SPDR Fund (XLF A), and the SPDR S&P Regional Banking ETF (KRE A-) are all-hitting resistance levels according to Brown, a natural rejection point for stocks.

“The S&P 500 hit an all-time high yesterday. It’s down marginally today. If the stock market went up 1% a day every day no matter what, we’d be in a bubble. So that is not what happens. We back and fill, perfectly natural. I think there were some interesting sectors that hit prior resistance levels technically and fell off. One would be the KRE, regional banks, down 2 1/2 percent today. Double as bad as the XLF on the session. They just hit previous resistance yesterday. Same thing with Industrials. Take a look at the XLI– previous resistance, couldn’t get through, backing off a little bit. It’s OK. It’s not catastrophic. Everyone should calm down. Happy Halloween,” said Brown on CNBC last Thursday.

The Wall Street Journal editorial board had this to say however: “President Trump and some in the White House blame the federal reserve and Europe for the slump, but neither explanation holds up…The strong evidence is a trade policy is the main growth corporate.”

While some analysts see this drop as part of a natural market cycle, others have deeper concerns about trade affecting stocks.

“So one of the questions that we’re getting a lot of is: is the worst over? Are we going to start to see an inflection point now in growth? And you’ve certainly seen some surprises to the upside over the last couple of months. I’d argue though that the weight of trade is going to continue put downward pressure on growth,” said Erin Browne, Pimco managing director on the same CNBC segment.

Browne noted that there is a possibility that stocks could continue to rally in some sectors while languishing in others.

“However that notwithstanding, it doesn’t mean that equities necessarily need to do poorly. I mean we’ve already seen the last nine months trade be a weight on, you know, global growth and US growth. At the same time stocks are at record highs. So I think what you’re going to see is more of the this divergence, where the strong consumers cyclicals, those that are really leveraging the strength of the US economy, like the consumer cyclicals, like housing in the US, those are going to continue to do well. But the sectors like energy, I mean energy earnings have been terrible. Materials and mining, those sectors that are more leveraged to the global cycle I think are going to underperform,” said Browne.