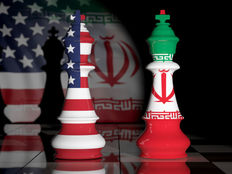 “The reason why we are modestly negative here is the tension in the Middle East and the noise coming out around it,” Phil Blancato, chief executive officer of Ladenburg Thalmann Asset Management, told Reuters. “I think the market is being very patient here, just waiting for news from one side or the other.”

As tensions between the U.S. and Iran foment, the markets were taking a wait and see approach before committing further to a record-setting rally. Some also pointed to the relatively muted response this time around to a sudden uptick in geopolitical risk as discontent in the region had been a lasting backdrop for markets for some time, the Wall Street Journal reports.

“It’s a knee-jerk reaction to sell off,” Jack Janasiewicz, portfolio manager at Natixis Investment Managers, told the WSJ. “But what we’ve seen historically is that a lot of these Middle East headlines have a short-lived effect.”

James Athey, senior investment manager at Aberdeen Standard Investments, also argued that the looser monetary policy out of the Federal Reserve has also bolstered broad confidence for equities and limited any downside risks.

“The Fed has also drugged the market into submission. The market doesn’t need to price risks properly because the Fed has underwritten risk in markets,” Athey told the WSJ.

Nevertheless, some were concerned about economic growth after the latest data revealed new orders for U.S.-made goods dipped in November due to a pullback in demand for machinery and transportation equipment, hinting at sustained weakness in manufacturing. The Commerce Department said U.S. factory orders declined 0.7% in November, which marked the third decline in four months.