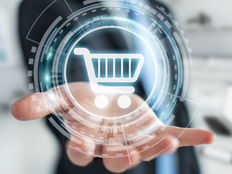 “The trend that of course pops out is everybody online retail sales grew at four to five times the rate of the retail universe,” Simeon Hyman, Global Investment Strategist, ProShares, said at the Inside ETFs conference, referring to the growth during the previous holiday season.

With the increased popularity of eCommerce and the decline of traditional brick-and-mortar shops, investors can also capture this growing trend through an ETF. The ProShares Decline of the Retail Store ETF (EMTY) and ProShares Long Online/Short Stores ETF (CLIX) both take a short position in brick-and-mortar retail stores to capitalize on weakness in traditional stores. Meanwhile, the ProShares Online Retail ETF (ONLN) takes on a long position in online retailers.

The ProShares Online Retail ETF tries to reflect the performance of the ProShares Online Retail Index, which includes companies that principally sell online or through other non-store channels, such as mobile or app purchases, rather than through brick-and-mortar store locations. Component holdings must be classified as an online retailer, an eCommerce retailer, or an internet or direct marketing retailer, according to standard industry classification systems.

The Decline of the Retail Store ETF provides daily short exposure or -1x to the new Solactive-ProShares Bricks and Mortar Retail Store Index, which is comprised of traditional retailers and equally weights components. The fund holds companies that include department stores, supermarkets, and sellers of apparel, consumer electronics, and home improvement items.

Lastly, the Long Online/Short Stores ETF is a type of long-short strategy and the first ETF to track the potential growth of online companies while benefiting from the decline of bricks and mortar retailers. Specifically, CLIX reflects the new ProShares Long Online/Short Stores Index, which combines a 100% long portfolio of online and non-traditional retailers with a 50% short position in bricks and mortar retailers.