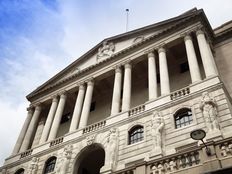 The $2 trillion stimulus package passed by the sentence aimed at propping up the economy sapped by the coronavirus outbreak features elements that are beneficial to banks, including smaller lenders.

“Part of the bill, which was voted on by the House on Friday, includes a $500 billion corporate-relief fund and roughly $367 billion of federally guaranteed loans to small businesses, which would be carried out through community banks,” reports Carleton English for Barron’s.

That could be beneficial for small-cap ETFs, such as the Invesco S&P SmallCap Financials Portfolio (PSCF A-).

PSCF tracks the S&P SmallCap 600® Capped Financials & Real Estate Index. That index “is designed to measure the overall performance of common stocks of US financial services companies. These companies are principally engaged in the business of providing services and products, including banking, investment services, insurance, and real estate finance services,” according to Invesco.

Banks rely on interest rates for profits and naturally, the higher, the better. The problem for banks is that their profit margins could suffer if they are paying out deposit rates at a higher level than market rates. Their earnings are also damaged when the spread between short-term and long-term rates flattens.

With the Federal Reserve having pared interest rates to near zero, concerns are mounting about banks’ net interest margins and whether those depressed margins could affect shareholder rewards, including buybacks and dividends. Bankers typically make their money off the difference between long-term loans and deposits, underscoring investors’ apprehension about the industry right now.

Bank depends heavily on net interest income or difference between the rates charged on long-term loans and the rates paid out for short-term borrowing. However, the spread diminished as rates on long-term debt plunged toward record lows.

However, the massive stimulus could be a boon for bank stocks, particularly if more government aid than the original $2 trillion is unveiled.

“Investors have been taking a closer look at banks as some of the sectors hardest hit by the pandemic have started to tap their credit lines,” according to Barron’s." Smaller, community banks with exposure to the energy patch sold off even more aggressively. But fiscal stimulus could boost demand. ”