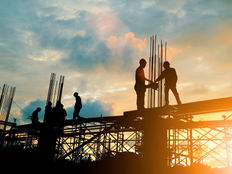 Infrastructure exchange traded funds can deliver higher levels of income than traditional equity funds, but ETFs such as the ProShares DJ Brookfield Global Infrastructure ETF (TOLZ ), have some defensive traits, too.

Specific to TOLZ, the ProShares fund is up more than 2% over the past month and proved steady as the S&P 500 slumped in May. TOLZ is now up 17.25% year-to-date and yields 3.20%. TOLZ focuses on companies whose assets include airports, toll roads, ports, communications, electricity distribution, oil and gas storage and transport, and water in both developed and emerging markets.

In the infrastructure space, there is a never-ending need for investments to update or repair aging communication, transportation, water and energy networks. According to American Society of Civil Engineers, existing U.S. infrastructure is crumbling and in need of major investment. Additionally, infrastructure as an asset class has long-term viability.

“From 2009 through the first quarter of this year, global equities, as measured by the MSCI World Index, had an annual return of 8.7% and a standard deviation of 13. The FTSE Global Core Infrastructure 5050/Net Tax Index fared even better, with an annual return of 9.4% and a lower standard deviation of 10.3%. It also handily outperformed in 2008,” reports Lawrence Strauss for Barron’s.

TOLZ “focuses on companies whose assets include airports, toll roads, ports, communications, electricity distribution, oil and gas storage and transport, and water in both developed and emerging markets. To be included in the index, companies must derive more than 70% of their cash flows from infrastructure assets. The index excludes companies that supply services such as construction and engineering to the infrastructure industry,” according to ProShares.

The income proposition offered by infrastructure investments is tantalizing as well.

“Global infrastructure yields were recently about 3.5%, well above the S&P 500’s 2%,” according to Barron’s. “The reason those yields aren’t higher, of course, is that these companies have to make huge investments in everything from ramping up 5G wireless networks to renewable energy to pipelines. But 3.5% isn’t shabby.”