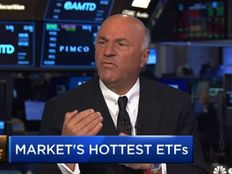 U.S. exchange traded funds attracted $21 billion worth of investments in July, taking the total year-to-date ETF inflows over $150 billion. Almost half of the inflows came from fixed-income ETFs.

A question does emerge: with a handful of popular equity ETFs recording massive inflows, why aren’t there big fixed-income ETFs with the same big numbers attached to them? It’s partially due to the large variety of bond ETFs taking in a lot of money from investors across the board, including the 20-year, to the 3-month, to mortgage backs, to junk bonds, to municipal funds, according to Dave Nadig, managing director of ETF.com, on today’s CNBC ETF Edge show.

“The entire U.S. bond sector has just been an umbrella turned upside down, catching money from investors,” Nadig said.

With bond ownership in mind, Kevin O’Leary of O’Shares ETFs doesn’t see much cause for taking duration risk at 1.8% of the 10-year. As he states, “It doesn’t make intuitive sense when I can get 2.4-2.5% yield on the currency of equity.” He explains how the companies that are issuing credits are paying less in yield than the dividend received in owning a stock.

It’s an odd time and there’s simply no reason to place one’s capital into a 10-year duration at under 2%, O’Leary said.

“Depending on how the market decides to shift, it’s all the easier to lose a lot of money,” O’Leary said.

Still, the lack of inflation is worth questioning. With the Fed cutting rates, and the tariffs around the world, inflation should be occurring to some degree. At least that’s the theory.

ETF Flows Are Having A Great Year

This year has been a big year for the market, with political and economically charged news events that have catalyzed investors to enter a variety of ETF sectors, including equities, gold, and most recently bonds. Doug Yones, head of exchange traded products at the New York Stock Exchange, explained how ETF flows have supported investor interests on CNBC.

Yones said, “It’s been a great year at the start and we’re talking about some of those numbers, almost record numbers. But the fixed income story is just in the earliest of early stages. As Dave [Nadig] was saying it’s across the board. We’ve got over $83 billion coming into these funds. And it’s not at a loss somewhere else. It’s not as if we’re seeing equity funds so off and money Flow into fixed income. Instead you just adopters of the ETF strategy, the ETF wrapper. They want the liquidity. They want the ease-of-use. They want diversification. So instead of me choosing mutual funds they are coming into the exchanges and they are buying the ETF.”

For investors who are concerned that most of the opportunity has already evaporated, Yones reassures them that things are constantly in flux in the ETF world, creating unique and diverse investments. ETFs like the First Trust Indxx NextG ETF (NXTG) offer unconventional opportunities.

“There’s still a lot of opportunity out there. And we’re seeing it right? We’re seeing people come to the industry and say, is there a new way to slice this up? When I look at something like real estate, historically it was just a broad-based REIT strategy. Now all of a sudden you have issuer’s coming in and saying, well what if I just look at the places that host data, server farms. And now you have an ETF that focuses on cloud storage. So there are really unique ways to slice and dice the market, and it’s happening in the world of ETFs,” Yones added.

In addition, the once unpopular universe of environmental, socially conscious, and responsible ETFs, has seen an uptick in investor interest as well.

“The interest is growing and the money is finally following and used to be well. It used to be well, let’s all talk to nice talk, but let’s not actually invest there. And that story has changed a lot. The two biggest launches in probably the last 10 years have been in the E.S.G. space this year. And so the money is starting to finally flow in. The growth is there. The numbers are there. There may have been a change in investor dynamic or it may have been that the products themselves were in the right products And now we’re building the right things,” Yones noted