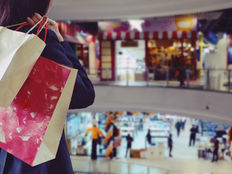 Over the past several years, investors have been hearing plenty about the rise of online retailers and the decline of some of the brick-and-mortar rivals. The ProShares Decline of the Retail Store ETF (EMTY) taps into the latter theme.

The Decline of the Retail Store ETF provides daily short exposure or -1x to the new Solactive-ProShares Bricks and Mortar Retail Store Index, which is comprised of traditional retailers and equally weights components. The fund holds companies including department stores, supermarkets and sellers of apparel, consumer electronics and home improvement items, such as retailers like Barnes & Noble, The Gap, Macy’s, Kroger and Best Buy, among others.

Many of the big-name brick-and-mortar retailers EMTY looks to exploit weakness are cornerstones in malls throughout the U.S. Problem is, and it’s good news for EMTY, mall vacancies are surging.

“Vacancies in U.S. shopping malls hit an eight-year high, though some regions are faring better with retail upheaval than others, according to data from Reis, part of Moody’s Analytics,” according to Seeking Alpha.

As an inverse ETF, EMTY is built for an environment that challenges retailers, including apparel sellers and department store operators, groups that combine for a third of the fund’s underlying index. On that note, teen apparel retailer Forever 21 recently filed for bankruptcy, another sign of the headwinds faced by traditional retailers as e-commerce tightens grip on the growth sphere in the retail arena.

Some metropolitan areas have low mall vacancy rates, but the widespread nature of increasing vacancies throughout the country potentially bodes well for EMTY.

“Some 17 cities, though, had a vacancy rate under 7%, as San Francisco led with a 4.1% rate. On the other hand, 24 cities had vacancy rates above 12%, including Memphis, Buffalo, and Albuquerque,” according to Seeking Alpha.

Shopping and consumer trends are changing as more buyers rely on the convenience of online retailers to quickly and effectively meet their discretionary needs. As the retail landscape changes, investors can also capitalize on the trend through ETFs that target the e-commerce segment.

Related: Why Bad News Is Good News For EMTY ETF

Adding to the case for EMTY are accelerating vacancies in areas that have already been hard hit by retail store closures.

“But rates worsened in several areas that already had a higher-than-average proportion of empty stores. Retail vacancies rose 2.4 percentage points in Syracuse, NY, over the past year to 14%,” notes Seeking Alpha.