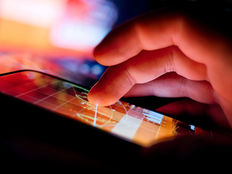 U.S. markets closed near record highs for the week, with the Dow Jones Industrial Average up 1.1% week to date, and the S&P 500 and Nasdaq Composite gathering 0.6% and 0.8%, respectively, for the week. This represents the third straight week of gains for the Dow, while the S&P 500 is headed for its fifth straight weekly improvement. The Nasdaq, meanwhile, is set up for a six-week winning streak.

The risk-on sentiment in the stock market and sanguine view of trade negotiations took has been wreaking havoc on bond prices, while driving yields dramatically higher. The U.S. 10-year Treasury yield jumped more than 15 basis points at one point on Thursday, its biggest upward move since the 2016 election. The 10-year rate hovered around 1.92% on Friday after starting the week near 1.75%.

“Positioning was so offsides,” said John Davi, chief investment officer at Astoria Portfolio Advisors. “People were buying bond-like proxies, buying fixed income and selling actively managed mutual funds and equities. So any sort of progress towards China and you’ll get this sort of rally.”

While stocks sold off early Friday as optimism that had risen about the prospects of the U.S. scrapping duties was quickly curtailed by remarks from President Trump, markets have since miraculously bounced back to close the week near the record highs.

Sentiment was also assisted this week by corporate earnings results that have overall exceeded expectations. Of the 425 S&P 500 companies that have reported thus far, 74% have beaten estimates, according to FactSet.

Still, investors who were rejoicing the possible end to the trade war are now more cautionary, as the roller-coaster headlines continue to affect the markets.

“Yearlong, we’ve been going back and forth with the tariffs,” said Kathy Entwistle, senior vice president of wealth management at UBS. “Things look good and the market goes up. Then someone says, ‘no that’s not what we said’ and the market goes down.”

“We have to be cognizant that this can still happen,” Entwistle said. But “when you get clarity, you get more excitement in the markets and you realize there’s more opportunities for them to go up.”

While third-quarter earnings have propelled the S&P 500 to a new high, investors still need bond exposure, but for investors who don’t want to allocate funds into various types of debt, they can look to a standalone option like the iShares Edge U.S. Fixed Income Balanced Risk ETF (FIBR).

Meanwhile, stock bulls could look at traditional stock ETFs like the Invesco QQQ Trust (QQQ A-) for equity exposure, or the SPDR S&P Pharmaceuticals ETF (XPH B), as healthcare has been a top performing sector.