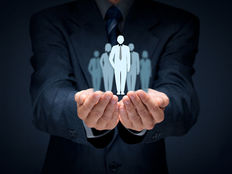 The ProShares S&P 500 Aristocrats ETF (NOBL A-) is higher by 23.54% year-to-date, not far off the pace being set by the S&P 500. In NOBL’s case, being nearly inline with the S&P 500 is impressive because the ProShares fund offers lower volatility than broader benchmarks.

NOBL holds 57 stocks and features exposure to 10 of the 11 GICS sectors. The fund’s stellar 2019 showing can be sourced a variety of its holdings and sector weights.

NOBL’s components are equally weighted, a strategy that reduces single stock risk, but retail giant Target is the fund’s top holding at a weight of just over 2%.

Target “enjoyed strong sales growth overall. It reported that for the quarter ended in October, it had same-store sales growth of 4.5%. That was on top of 5.1% comp growth in the year-earlier quarter,” according to Barron’s.

Dividend-paying companies have exhibited a history of outperforming the markets. Since 1960, dividends have contributed approximately 33% of the S&P 500’s total return.

“S&P Global’s dividend has benefited from strong earnings growth as well. In the third quarter, the company earned $2.46 a share, beating the FactSet consensus estimate by 12 cents, and up from $2.11 a share in the previous year’s third quarter,” according to Barron’s.

That stock is one of NOBL’s financial services holdings, a sector that represents 12% of the ETF’s weight. Importantly, that group has delivered steady dividend growth in recent years, a trend that’s expected to continue in 2020.