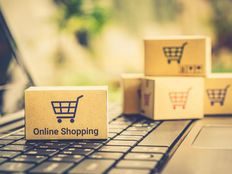 Online Retail ETF Ramping Up And Ready to Rally

With the holiday shopping season ramping up and Black Friday today and Cyber Monday just a few days away, ETFs focusing on e-commerce, including the ProShares Online Retail ETF (ONLN), are in focus.

Up 13.20% year-to-date, ONLN seeks investment results, before fees and expenses, that track the performance of the ProShares Online Retail Index. The index tracks retailers that principally sell online or through other non-store channels. The index uses a modified market-capitalization weighted approach, is rebalanced monthly and is reconstituted annually. Retailers may include U.S. and non-U.S. companies. To be eligible, retailers must: be classified as an online retailer, an e-commerce retailer, or an internet or direct marketing retailer, according to standard industry classification systems; have a market capitalization of at least $500 million; have a six-month daily average value traded of at least $1 million; and meet other requirements.

Shopping and consumer trends are changing as more buyers rely on the convenience of online retailers to quickly and effectively meet their discretionary needs. As the retail landscape changes, investors can also capitalize on the trend through ETFs that target the e-commerce segment.

“ProShares Online Retail, for example, has almost a quarter of its entire assets in Amazon, and another 13% in Chinese Internet giant Alibaba,” reports Reuters. “If you want to bet on the big winners – and Amazon has certainly been a big winner – that would be the way to go, said Todd Rosenbluth, head of ETF and mutual fund research at independent research firm CFRA.”

Online retail has been rapidly expanding. Global e-commerce sales doubled between 2014 and 2018 to $2.8 trillion annually from $1.3 trillion. By 2020, an estimated 2 billion people are expected to be digital shoppers or a 19% jump from 2018 levels, as more people, notably from emerging economies where barely half the population is online, gain access to the internet. Almost one-third of consumers are already shopping online at least weekly and 75% at least once a month.

“The Census Bureau of the Department of Commerce announced today that the estimate of U.S. retail e-commerce sales for the third quarter of 2019, adjusted for seasonal variation, but not for price changes, was $154.5 billion, an increase of 5.0 percent (±0.4%) from the second quarter of 2019,” said the Commerce Department in a note out last week.

Other recent data points cement the case for ONLN.

“Online shopping alone is expected to amount to $143.7 billion over the last two months of the year, a 14.1% increase over last year, according to projections by Adobe Analytics,” reports Reuters.