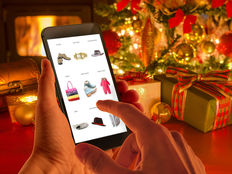 A Retail ETF With Use Beyond Holiday Shopping

Shoppers recently indulged in Black Friday and Cyber Monday, two of the most important days on the retail calendar. However, the impacts of the shift to online shopping have wide-ranging implications that move well beyond just those two days.

In other words, ETFs such as the ProShares Online Retail ETF (ONLN) are useful for investors throughout the year. ONLN seeks investment results, before fees and expenses, that track the performance of the ProShares Online Retail Index. The index tracks retailers that principally sell online or through other non-store channels. The index uses a modified market-capitalization weighted approach, is rebalanced monthly and is reconstituted annually.

Early indications show that food comas on Thanksgiving couldn’t keep people from going online to do a little, or as data already suggests, a lot of shopping. Adobe showed online retail sales on Thursday will reach a record level of $4.4 billion.

The number would represent an 18.9% year-over-year increase compared to last year’s $3.7 billion. Thus far, sales have reached $2.2 billion with almost 50% of sales stemming from shopping on mobile devices. Those numbers were for Thanksgiving and it’s worth noting Black Friday and Cyber Monday data were strong as well.

The Biggest Of Online Shopping Events

“Cyber Monday is one of the biggest online shopping events of the year and, combined with Black Friday, kicks the holiday shopping season into high gear,” ProShares said in a recent note. “Between November 1 and December 31, it’s estimated that $143.7 billion may be spent online in the United States. Furthermore, 59% of shoppers are planning to spend at least a portion of their holiday budget online.”

Online retail has been rapidly expanding. Global e-commerce sales doubled between 2014 and 2018 to $2.8 trillion annually from $1.3 trillion. By 2020, an estimated 2 billion people are expected to be digital shoppers or a 19% jump from 2018 levels, as more people, notably from emerging economies where barely half the population is online, gain access to the internet. Almost one-third of consumers are already shopping online at least weekly and 75% at least once a month.

Data suggest ONLN is a viable play for the near-term and beyond.

“Next year, global online sales are projected to surpass $4 trillion—a 41% rise from 2018,” ProShares said. “More than two billion people are expected to be digital buyers in 2020, a 14.5% increase from 2018. In two years’ time, annual online purchases are projected to reach 18.1% of total global retail sales.”