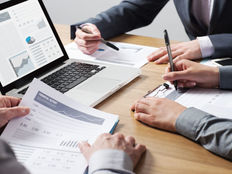 Following the central bank cutting rates on Wednesday, XLF is up 17.9% year-to-date.

Market observers have previously warned that Wall Street banks could face pressure as tepid market volatility could have contributed to more muted trading desk activity. Furthermore, the Federal Reserve has signaled its intentions to cut interest rates, which would further hurt the banking industry’s ability to generate profits from lending. However, some investors believe some of XLF’s marquee components could actually benefit from lower rates.

Ari Wald, Oppenheimer’s head of technical analysis, “says a reversing trend in bond yields should begin to benefit financials and other cyclical stocks again. The 10-year yield dipped below 2% earlier this month before bouncing back, a level Wald now sees as a bottom,” reports CNBC.

Earlier this year, bank stocks and ETFs slumped a bit after the Fed downgraded its outlook for the U.S. and reaffirmed its earlier dovish stance, which provides a poor environment for U.S. banks, whose business models typically capitalize on rising interest rates. However, that trend could reverse even if the Fed lowers rates this week.

Investors seem to be embracing the idea that XLF can rally even if the Fed soon lowers interest rates. Over the past week, XLF has seen inflows of $747.35 million, good for the fifth-highest tally among US-listed ETFs.