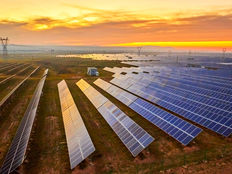 Job growth in the solar energy sector ticked higher in 2019—the first time in about three years—showing that the effects of import tariffs are starting to wane for solar energy. Other factors like declining costs and a federal tax credit helped drive the growth, according to a report by The Solar Foundation.

Per a Bloomberg report by Brian Eckhouse, “U.S. jobs in the industry increased 2.3% to almost 250,000 last year, marking the first annual increase since 2016 – "the year before":https://www.bloomberg.com/news/articles/2017-04-26/china-owned-u-s-solar-maker-seeks-u-s-tariffs-on-china-imports the threat of new tariffs emerged. The uptick won’t be a blip: the nonprofit organization projects a 7.8% surge in jobs in 2020.”

“We’re back on the growth trajectory,” Andrea Luecke, The Solar Foundation’s president and executive director, said in an interview.

One major factor the article cited in determining whether the solar energy industry can continue its strength is trade. The article noted that the “threat of tariffs had initially prompted developers to cancel or ice projects, slowing installations. While the industry was plagued by uncertainty in 2017 and took the brunt of the hit from tariffs in 2018, that eased last year, according to Ed Gilliland, senior director at the Solar Foundation.”

Nonetheless, as it stands, the data bodes well for the Invesco Solar ETF (TAN B). TAN, which started back in 2008, seeks to track the investment results of the MAC Global Solar Energy Index, which is designed to provide exposure to companies listed on exchanges in developed markets that derive a significant amount of their revenues from the following business segments of the solar industry: solar power equipment producers including ancillary or enabling products.

Other Alternative Energy ETFs to Consider

The sun can’t have all the fun—alternative sources of energy like wind and lithium funds could also experience more growth.

Investors who want to capitalize on increasing reliance on wind as an alternative energy resource, they can look at the First Trust Global Wind Energy ETF (FAN A+). The fund seeks investment results that correspond generally to the price and yield of an equity index called the ISE Clean Edge Global Wind EnergyTM Index.

With the growth of electric vehicles, another ETF to look at is the Global X Lithium & Battery Tech ETF (LIT B-). LIT, which is nearly nine years old, tracks the Solactive Global Lithium Index. The underlying index is designed to measure broad-based equity market performance of global companies involved in the lithium industry.