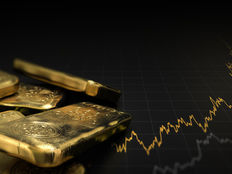 The Going Is Getting Good For Gold ETFs

Gold ETFs, such as the SPDR Gold Shares (GLD A-) and the *SPDR Gold MiniShares (GLDM)*, were among last year’s best-performing commodities funds, a theme that is extending into this year.

New data from the World Gold Council (WGC) highlight some of the catalysts behind gold’s stellar 2019 and why the yellow metal, GLD, GLDM and related products can continue delivering for investors this year.

“2019 was broadly a year of two distinct halves: resilience/growth across most sectors in the first half of the year contrasted with widespread y-o-y declines in the second,” said the WGC. “Global demand in H2 was down 10% in the same period of 2018 as y-o-y losses in Q4 compounded those from Q3, notably in jewelry demand and retail bar and coin investment. Central bank demand also slowed in the second half – down 38% in contrast with H1’s 65% increase.”

The Federal Reserve decided to keep rates unchanged on Wednesday and this could be gold’s main driver going forward if the data-dependent central bank deems the economy healthy enough. This could support gold prices even if the market experiences a lull in precious metal purchases after the coronavirus craze eventually fades.

“ETF investment inflows bucked the general trend. Investment in these products held up strongly throughout the first nine months of the year, reaching a crescendo of 256.3t in Q3. Momentum then subsided in Q4, with inflows slowing to 26.8t (-76% y-o-y),” according to the WGC.

Market participants turned to gold toward the end of 2019 as a potential hedge against economic and political uncertainty, especially after U.S. equities rallied toward record highs. The most recent rally may be attributed to rising tensions between Tehran and Washington after President Trump reiterated threats to strike Iran if things escalate between the two countries and as markets waited on the inevitable retaliation to the death of Major General Qassem Soleimani.

“Inflows into global gold-backed ETFs and similar products pushed total holdings to a record year-end total of 2885.5t. Holdings grew by 401.1t over the year, with 26.8t added in Q4. Inflows were heavily concentrated in Q3 as the US dollar gold price rallied to a six-year high,” notes the WGC.