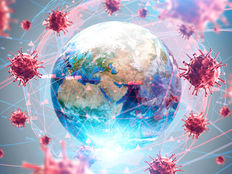 The U.S. dollar ticked higher on Wednesday on the notion that the Federal Reserve would implement more policy easing with a rate cut, but the move could also be spurred by a flight to safe havens as the coronavirus outbreak continues to inject fear into the capital markets.

In the forex market, the sentiment is anything, but risk-on as traders aren’t throwing caution to the wind.

“The broader theme of risk aversion is still impacting FX markets, though markets are starting to reprice some of their excessive policy easing expectations,” said Manuel Oliveri, a currency strategist at Credit Agricole in London.

The fear that the coronavirus is turning into a global pandemic was spurred by more cases appearing in the Middle East and Europe. The U.S. Federal Reserve is certainly keeping a close watch on the virus developments, but it won’t be quick to pull the trigger on interest rate policy—traders, however, could be thinking otherwise.

“But Fed Vice Chair Richard Clarida said on Tuesday that while the central bank is monitoring the impact of the epidemic on the U.S. economy, it is still too soon to gauge if it would require a change in monetary policy,” a CNBC report noted. “While money markets have also increased expectations of more cuts from the Fed, with interest rate futures now pricing in about 60 bps of cuts by the end of the year compared to 40 bps a month earlier, investors were slightly more cautious.”

“The significant dovish tilt being priced in by markets from the FOMC may not materialise and that might cause the next leg of the dollar rally,” said Peter Chatwell, head of multi-asset strategy at Mizuho Bank.

ETF traders looking to play dollar moves can look to funds like the Invesco DB US Dollar Bullish (UUP A) or the WisdomTree Bloomberg U.S. Dollar Bullish Fund (USDU ).

Gold is the other popular safe haven option and for traders who want to take the other side of a U.S. dollar-gold trade or hedge can use gold-backed ETFs. Funds to consider include the SPDR Gold Shares (GLD A-) and SPDR Gold MiniShares (GLDM), while short-term traders can also play the gold market through miners with the VanEck Vectors Gold Miners (GDX B+), Direxion Daily Jr Gold Miners Bull 3X ETF (JNUG B-) and the Direxion Daily Gold Miners Bull 3X ETF (NUGT C+).