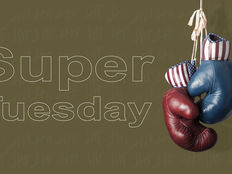 “Today is a Joe Biden relief rally and an awareness that Bernie Sanders may not be the potential threat to the U.S. economy and markets,” Eric Schiffer, chief executive officer of the private equity firm, the Patriarch Organization, told Reuters.

“A higher probability of a more centrist Democrat candidate has provided some comfort” for investors, Hugh Gimber, a strategist at JP Morgan Asset Management, told the Wall Street Journal.

The healthcare segment, notably those of health insurers, fell sick for months after self-described socialist Sanders started to gain momentum among the Democratic nominees and pushed for a “Medicare for All” proposal, which would eliminate private health insurance.

“Health care has been weak lately because of concerns about potential for Bernie Sanders becoming the Democratic candidate,” Randy Frederick, vice president of trading and derivatives for the Schwab Center for Financial Research, told the WSJ. “If there’s a segment of the market that is getting a political lift, it’s probably health care.”

The rally in equity markets on Wednesday also helped to reverse some losses that markets experienced Tuesday after the Federal Reserve announced its first emergency rate cut in more than a decade and warned that monetary policy can only do so much. The half-percentage point rate cut briefly helped stocks surge before they pared back gains to finish sharply lower.